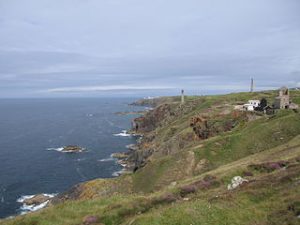 If you’re one of the many viewers of Poldark, this coastline may look familiar. It’s Lelant Engine, near Pendeen in Cornwall.

Cornwall, a peninsula in South West England surrounded by the English Channel and Celtic Sea, is noted for its scenery and beaches. Tourism is an important part of the economy. Poldark, based on the books by Winston Graham, attracts many visitors to Cornwall.

Adaptations from the books of ROSAMUNDE PILCHER, today’s featured author, have a similar effect.

If the adage “write what you know” applies to any author, it clearly applies to Rosamunde Pilcher. She was born in 1924 in Lelant, Cornwall. She attended the School of St. Clare in Penzance, served in the Women’s Royal Naval Service (WRENS) from 1943-1946, and then married a Scotsman and moved to Dundee. Pilcher never came back to Cornwall to live, but Cornwall infuses her stories.

Pilcher began writing in 1949, initially using a pen name. Her breakthrough bestseller was The Shell Seekers in 1987. The novel gained international recognition and remained on the New York Times Bestseller List for 48 weeks. It sold over five million copies. 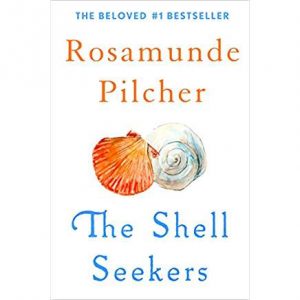 THE SHELL SEEKERS is a family saga revolving around the life of Penelope Keeling. It includes the story of her devoted artistic parents, and the eclectic life they lived in London and Cornwall. When World War II breaks out, Penelope joins the WRENS, until she’s swept off her feet by a handsome officer. When she becomes pregnant, Penelope’s parents tell her she doesn’t have to marry. But she’s in love. Alas, the true love of Penelope’s life comes along after marriage.

Penelope has two daughters and a son, each making decisions that may or may not be for the best. Each having their own ideas about what Penelope “should” do. If I tell you who the “shell seekers” are, it will spoil the surprise of a very good book. A book so engaging that I read it once for the story, and a second time just to enjoy the masterful writing.

The Shell Seekers, starring Angela Lansbury, was a Hallmark Hall of Fame movie in 1989. In 2006 Vanessa Redgrave took on the leading role. 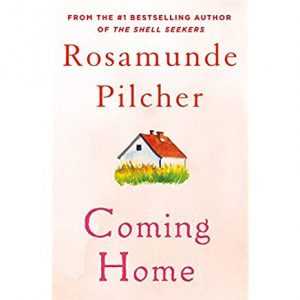 I enjoyed The Shell Seekers so much, I read COMING HOME (1995) which is enjoyable, somewhat less enthralling, and the winner of the 1996 Romantic Novel of the Year Award from the Romantic Novelists’ Association. I read the book before I saw the award, and didn’t find it to be romantic so much as what is called “coming of age.”

Coming Home, also set in Cornwall in the years before and during the Second World War, tells the story of two friends who meet at St. Ursula’s School. Judith Dunbar lives with her mother and younger sister while her father works away in Singapore. She’s left behind when her mother and sister return to Singapore.

At school Judith meets Loveday Carey-Lewis, and soon becomes entwined in her friend’s family affairs. When war breaks out, Judith joins the WRENS, and is stationed in Ceylon, until the plot begins twisting its way to the end of the story, a satisfactory conclusion for all concerned.

Pilcher’s novels make attractive viewing. Public broadcaster ZDF of Germany aired its first Pilcher movie, The Day of the Storm, in 1993. ZDF has filmed an additional 111 stories, all on location in Cornwall with German actors.

Estimates made in 2017 indicate Pilcher has written 28 novels and sold over 60 million books, gaining a fortune of over £100 million.

If you like family sagas with plenty of personalities, and want to “get lost” in a book, I can recommend both The Shell Seekers and Coming Home as excellent summer reading projects.

For a taste of how Pilcher’s books look on the screen, I’ve attached the trailer for the1993 production of The Shell Seekers.