Catherine the Great’s grandson Nicolas I who ruled from 1825 to 1855 laid out the square with St. Isaac’s Cathedral at the northern end and the Mariinsky Palace in the south. Nicholas began building the palace in 1829 when his eldest daughter the Grand Duchess Maria Nikolaevna was ten years old and presented the palace to her as a wedding gift in 1839.

Directly in front of the Mariinsky Palace, in the center of the square is a bronze equestrian monument of Nicholas I, the first equestrian statue in Europe with the rear hooves of the horse providing the only support points. Grand Duchess Maria Nikolaevna reportedly said she disliked the statue because the first thing she saw in the morning was the back end of her father’s horse. 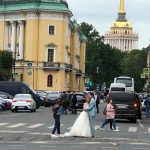 The Hotel Astoria is on the eastern side of the square. When it opened in 1912 it was one of the most luxurious hotels in the Russian Empire, built to host visitors coming to St. Petersburg to celebrate 300 years of Romanov rule. Hotel Astoria underwent complete renovations in 2002, is a member of Leading Hotels of the World, and managed by Rocco Forte Hotels, in case you want a reservation. 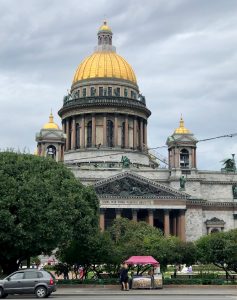 The present St. Isaac’s Cathedral is the fourth church at this site. Alexander I commissioned the cathedral and construction began in 1818. Before construction could begin, 25,000 piles had to be driven into the marshy soil. The building itself rests on 10,000 tree trunks. And the amazing statistics don’t end here.

The cathedral dome is 333 feet high and covered with 500 kilos of pure gold. Artisans gilded the dome with a technique that used mercury. Depending on the source, between 60 and 1,000 workers died from mercury poisoning.

The exterior has 112 red granite columns with corinthian capitals. Each 80 ton column was erected as a single block, using wood frameworks before the walls were erected. The bronze doors are covered with relief designs patterned after the Battistero di San Giovanni in Florence.

The interior is equally astounding. Decorations utilize 900 pounds of gold, 16 tons of malachite, 1100 pounds of lapis lazuli, and 1,000 tons of bronze to create mosaic icons, paintings, and columns. The result is breathtaking.

There are three altars. The central altar is dedicated to St. Isaac, the ascetic monk of Dalmatia who was Peter the Great’s patron saint. To the left is an altar for St. Alexander Nevsky, canonized in 1547 for his role as a defender of Kievan Russia. On the right hand side is an altar for St. Catherine, a martyr of the early church.

The interior of the cathedral can accommodate 14,000 people. In 2016 2.3 million tourists visited the Cathedral of St. Isaac.

Visiting the historic sites of St. Petersburg was an awe-inspiring experience. I’ve never seen so much gold, or amazing art in one place. I departed having seen more than I expected, and knowing there are many treasures I didn’t see.