The name Himalayas brings up many images. Of course Mount Everest comes immediately to mind. But there’s more to this range of mountains that stretches from Pakistan in the west across India, Bhutan and Nepal before ending in China. Tibetan Buddhism also has an association with the region, although China swallowed Tibet itself in 1950. Within the Indian Himalayas lies the tiny kingdom of Sikkim which became the 22nd Indian state in 1975. 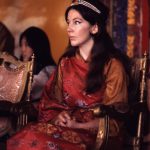 Sikkim entered American consciousness in 1963 when Hope Cooke married then Crown Prince Walden Thondup Namgyal. The marriage lasted ten years. I didn’t remember anything about Hope’s reign as Queen Consort until we arrived at the Nor-khill Hotel in Gangtok. Built in 1932 as a royal guest house, the lobby retains an opulent flavor. Pictures of the last royal couple of Sikkim hang throughout the hotel. 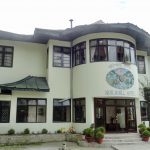 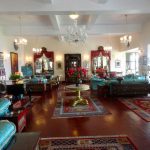 Gangtok at an elevation of 5410 feet is the capital of Sikkim. Visitors fly into Bagdora airport and embark on a four hour drive over twisting roads to get to Gangtok. Our drive was twice as long due to landslides and heavier than usual traffic. At the border town of Rangpo, we stopped to get our permit for Sikkim. 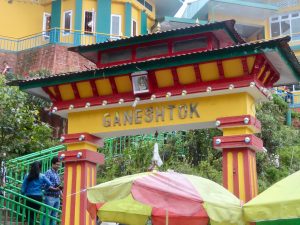 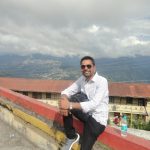 introduced me to the many monasteries near Gangtok. Our first stop was Ganeshtok Shrine, a Hindu temple in the midst of Buddhist Sikkim. We came for the view. Too bad it was a cloudy day. 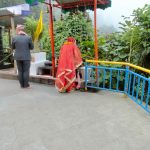 But it must have also been an auspicious day. A couple made their marriage vows. The bride in red; the groom in western clothing. And everything recorded via a smart phone. 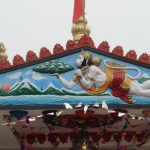 Nearby we went to Hanumantok Shrine, sacred to Lord Hanuman and famous for its view of the Kanchenjunga Peaks. 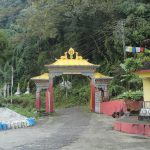 A few steps away, we visited Do Drul Chorten, a stupa built by Trulshik Rinpoche in 1945. One hundred eight prayer wheels surround the stupa. Legend says villagers invited Trulshik Rinpoche to exorcise the site of evil spirits. He agreed, and told villagers to bring certain items from their homes which he then buried at the bottom of the stupa. The spirits left. 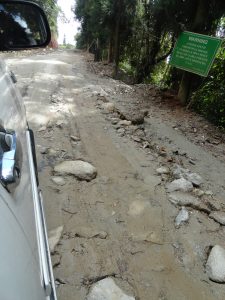 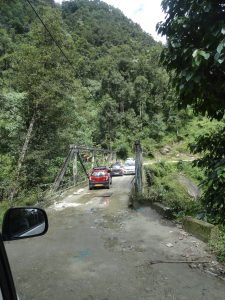 Over bad roads and rushing water we drove up a one-track road until we reached the Seven Sisters Waterfall. 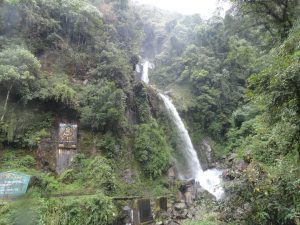 In addition to the falls, there was a food stall and “comfort station.” 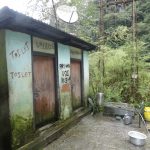 And then we drove uphill again. We passed large stacks of gravel by the road and people putting the gravel in the roadbed by hand. 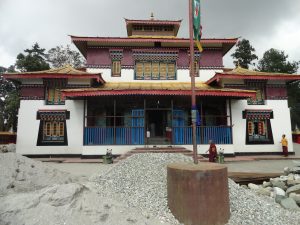 At last we reached our destination: Phodong Monastery first built in the 18th century. It’s one of the six most important monasteries in Sikkim. The monastery houses 250 monks of the Kagyu lineage. On the way back down the mountain we stopped at the Labrang Monastery, once important to the Nyingmapa lineage of Buddhism. The monks built Phodong Monastery and continue its upkeep and services. The king built Labrang, now abandoned though local villagers look after it. 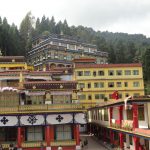 Rumtek Monastery is a large complex with monastic students, the temple, and Karma Shri Nalanda Institute. The Golden Stupa, crafted entirely from gold, is a reliquary for His Holiness the 16th Gyalwa Karmapa Rangjung Rigpe Dorje.

Nearer to Gangtok itself is Enchey Monastery, started in the mid-nineteenth century when the founding monk who could, it is said, fly and also perform the magical feats, arrived to make a hermitage. It is said that if you pray for something here, your wish will come true. Ninety monks from the Nyingma sect occupy the monastery. 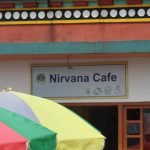 At Enchey Monastery I found Nirvana, after a fashion, in the guise of Nirvana Cafe. 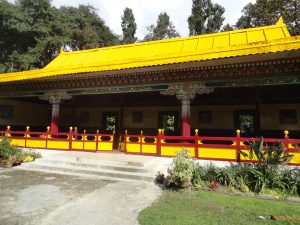 Tsuklakhang Monastery, located on the grounds of the former Royal Palace, is the last monastery I visited. Also known as the Royal Monastery, this site hosted many official functions. At New Year, which falls between Christmas and Valentine’s Day, there were huge celebrations. The royal family and their guests watched the festivities from the royal pavilion which is also where the king gave audiences. 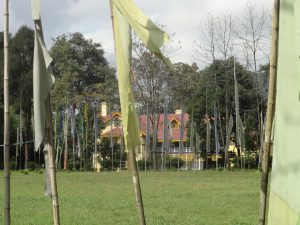 It’s a quiet place now. No celebrations. Just a few monks chanting. To the side, near the Royal Pavilion, you can just glimpse the edge of former palace. It’s not Buckingham Palace, but for a time, it was Hope Cooke’s home.

Before we leave Gangtok, I want to share a few pictures from the market at the bottom of Lal Bazaar. Fruits, vegetables, and common household items are available here. 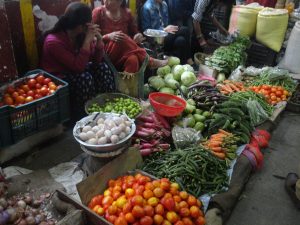 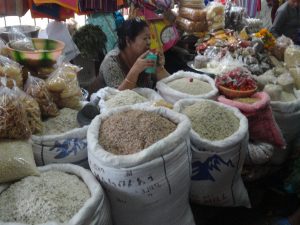 After this visit to Sikkim, I will always associate the Himalayas with monasteries. Circumstances prevented me from going beyond Gangtok, but I’m glad there was extra time to explore the local area.

Photo of Hope Cooke, 1971, in the Public Domain. Wikimedia Commons.

All other Photos by Author. All Rights Reserved.

Cherie Burns. “Being a Queen Didn’t Quite Work Out, But on This Cooke’s Tour Hope Springs Eternal.” People. March 9, 1981.