September is one of those transitional months. When it begins, the weather is still hot. By the last week, leaves are beginning to change color.

The Anglo-Saxons called this month Gerst monath, Barley Month. It was the month for harvesting barley which was processed into a malt barley used in brewing beer.

The name September is from the Latin Septem, which means seven. The oldest Roman calendar had ten months, with March as the first month and September the seventh. The Julian calendar added two new months, January and February, and started the year in January. Which is why although the name September indicates the seventh month, it’s really the ninth.

There are three flowers associated with September. 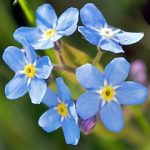 The first is the Forget-Me-Not. Not surprisingly, the flower represents true love, lifetime connections, and remembrance. There is a German folk tale about the Forget-Me-Not. As two lovers walked along the Danube River,  they saw the bright blue flowers at the edge of the water. The man stooped to pick the flowers for his love, and was swept away by the river. As he swirled away, he asked her not to forget him.

The Greeks called this family of flowers Myosotis genus, mouse ears, due to the small petals. 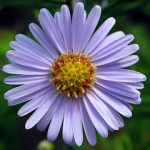 The second flower of the month is the Aster, representing patience, elegance, and daintiness. A Greek myth explains that when Zeus decided to flood the earth to stop a war among men, Astraea, goddess of innocence, asked to be turned into a star. When the flood waters receded, Astraea wept for the lives lost. Her tears turned to stardust and fell to earth. Wherever her tears fell, an aster grew. 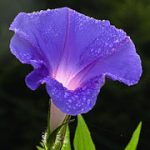 The third flower of September is the Morning Glory, a vine from South America. The symbolism is about unrequited love, and mortality.

TIME TO BAKE FOR THE HOLIDAYS

I know you don’t want to think about December holidays yet, but if you’re planning to make a Christmas cake from scratch, this is the month to bake it. A Christmas cake is not the same thing as the dreaded Fruit Cake, though they share similar 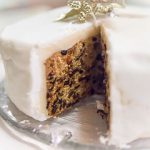 In the Middle Ages, people fasted on Christmas Eve day, and ate a plum porridge in the evening. In search of better taste, they added dried fruit, spices, and honey to the mixture until it became a pudding. The spices were very expensive, exotic, and reminded people of the gifts brought to the Baby Jesus by the Wise Men. In the 16th century, someone came up with the idea of adding butter and eggs to the mix — YUM. Even better, bakers started using marzipan for frosting.

Christmas cakes have to be made in advance. Opinions vary on how far in advance —September, October, or even November. After the cake is baked, the baker puts it in an airtight tin. Once a week, the baker takes the cake out of its container and adds about two tablespoons of brandy, whiskey, or sherry to keep the cake moist. The non-alcoholic version adds orange juice or a strong tea such as Earl Grey. This is called feeding the cake.

When it’s time to indulge, a marzipan frosting is added.

A History of Christmas Cakes. Puckles.