You may be wondering what Purna Yoga, Volcanoes, and Old Hawai`i could possibly have in common. All contribute to my creative growth as a writer and my joy in the history of Hawai`i. So let us begin.

I didn’t post last week, because I attended a four-day yoga workshop at Big Island Yoga Centers in Kealakekua, Hawai`i. Aadil Palkhivala, founder of Purna Yoga, led us through sessions on hips, knees, inversions, twists, backbends, backs, necks, and shoulders. I didn’t realize I could focus on so many body parts – fortunately not at the same time. Nevertheless, it took all my concentration to keep up, and so, alas, none could be spared. To learn more about Purna Yoga, check out http://www.yogacenters.com or listen to the radio show http://www.aliveandshineshow.com

[Sidebar: This position is called “Full Lotus” – like the flower.  No, I cannot yet achieve this model of flexibility — which may be why I have other names for the position.  Just sayin’]

History at the Manago Hotel

I had a second adventure the same weekend, because I stayed at the historic Manago Hotel in Captain Cook, about four miles up the road from the Yoga Center.  It is a fascinating slice of ”Old Hawai`i”  — in business since 1917.   http://www.managohotel.com  I’ll be sharing about the Manago Hotel in my next blog. 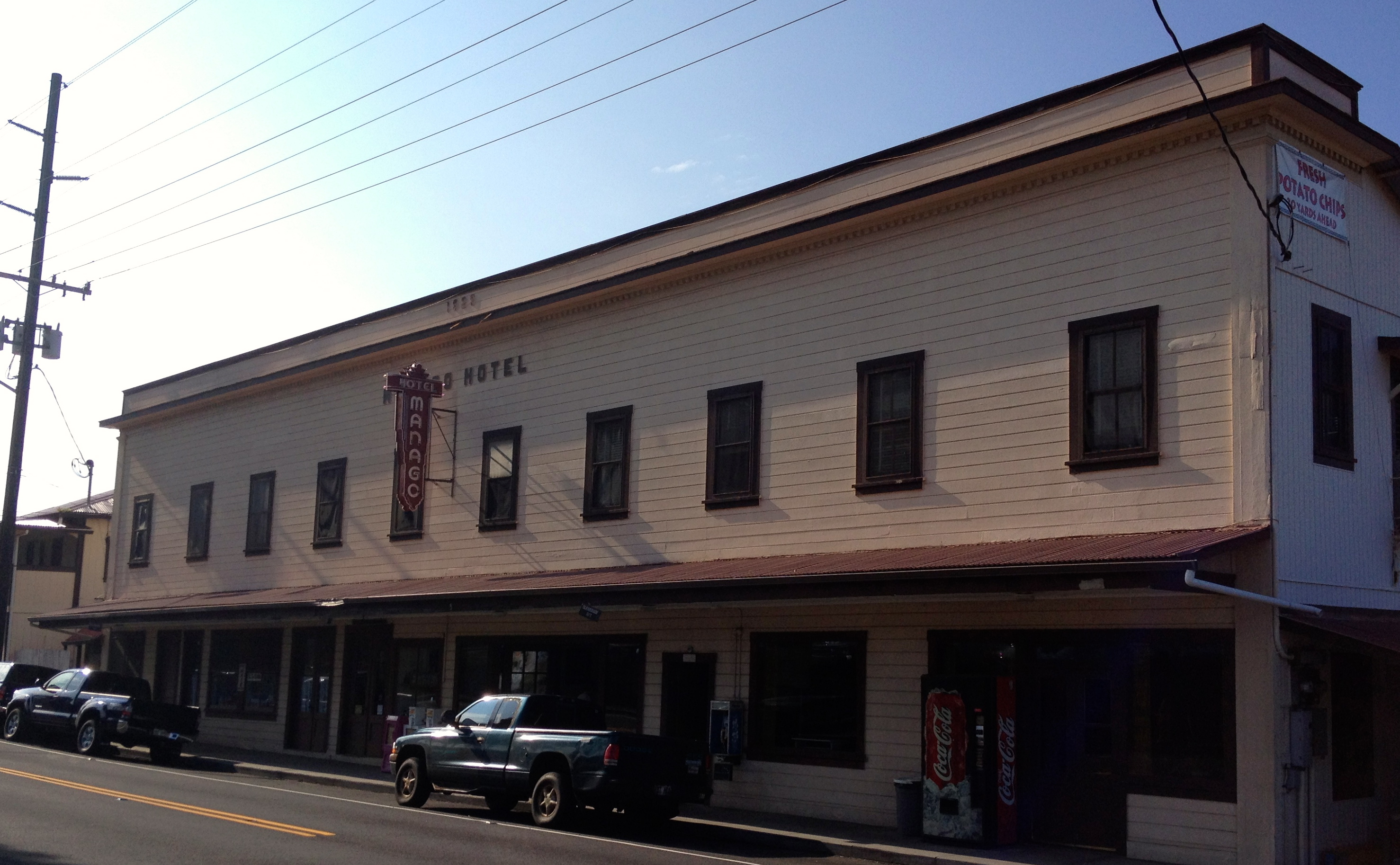 Hawai’i Volcanoes National Park is about a 40 minute drive from my house.  It, too, is another world.  The domain of Pele, the Hawaiian goddess of fire and volcanoes.  Hawaiian practitioners still conduct ceremonies and make offerings at the Kīlauea  Summit. 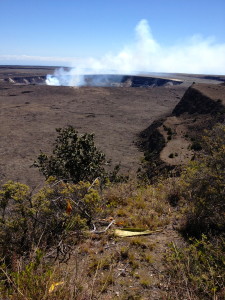 If you look closely at the bottom portion of the photograph I took yesterday, you will note the remanents of a ho`okipu, an offering left behind.

The volcanic gas rising from Halema`uma`u Crater is sourced from the molten lava lake beneath the crater floor.  The crater has been active since March 2008.  Take a look at the park website and web cam http://www.nps.gov/havo/index.htm

The Legend of `Ōhi`a, Lehua, and Pele.

(There are several versions of the story, so you may know a different one.)

Once there a boy called `Ōhi`a and a girl called Lehua who grew up together.  When they became young adults, they had eyes only for each other, and swore to be together always.  `Ōhi`a was very handsome, and one day, as he walked through the forest, he met a beautiful woman.  The woman invited `Ōhi`a to be her lover, but he refused.  She invited him again, and `Ōhi`a rejected her a second time.  The woman was Pele.  Enraged, Pele turned `Ōhi`a into a tree.

Later, Lehua searched the forest looking for her lover.  When she realized what had happened she cried incessantly, until the gods took pity on her and transformed Lehua into the lovely flower that blooms on the `ōhi`a tree.  Thus the lovers reunited, never to be separated again.

This is how the ‘ōhia lehua tree, a species of flowering evergreen, came to be created.

I took this photo yesterday.  See how closely Lehua clings to `Ōhi`a`s strong branches as she prepares to bloom.  I find it a beautiful metaphor of eternal love. 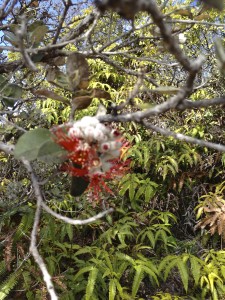