This is how I felt on Saturday, the day after ISIS attacks in Paris left 129 dead and 352 wounded. The casualties were ordinary people enjoying a warm Friday evening. Their crime – being in target locations. A soccer stadium, a concert hall, and several cafes.

The enormity of the attack, the innocence of the victims, the fear that no place can be made safe. Many people in the western world felt the attack as an emotional body blow, as we were meant to feel it. We will “recover.” We will seek revenge and destruction on the faceless enemies who hate us so much they gladly blow themselves up to harm us.

Globally the attack on Paris was one of several in recent days. A few days before the Paris attacks, suicide bombers in Beirut killed 43 and wounded over 200. In Baghdad, 26 people died. On October 31st a Russian plane exploded killing everyone aboard. Each time, humanity absorbed an emotional body blow.

And of course, there are lots of killings close to home. Domestic violence. Lone shooters in schools and movie theaters.

Human beings are resilient. We absorb the pain into our bodies. We silently unleash a primal scream as we go about the routines of our lives. Habits that bring comfort. Behaviors of defiance in the face of the unexplainable. Silently we scream. Quietly we seethe. We want revenge. Already French bombers have blasted Syrian targets. “Good,” we think. But still we throw up our hands in anguish.

President Obama stated the truth when he said the attack on Paris was an “attack on all humanity and the universal values that we share.” Liberal values of “Liberté, Égalité, Fraternité.”

Perhaps we can transform the negative energy of fear and betrayal into the positive attributes embodied in the words Liberty – Equality – Humanity. As we encounter friends and strangers, we choose how we respond to them, and they react to our choice. We can choose positive thoughts and actions. It’s worth a try. 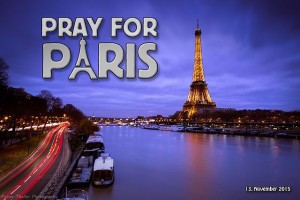 Munch said he conceptualized The Scream while “I was walking along the road with two friends – the sun was setting – suddenly the sky turned blood red – I paused, feeling exhausted, and leaned on the fence – there was blood and tongues of fire above the blue-black fjord and the city – my friends walked on, and I stood there trembling with anxiety – and I sensed an infinite scream passing through nature.”