I was in Seattle for business meetings last week. But as the saying goes, ‘all work and no play makes Sandra a dull girl.’ Remedy – indulge in Seattle’s cultural delights. The historian in me won the toss, so my first visit was to the Pacific Science Center’s Pompeii: The Exhibition.

It’s not the first time Pompeian artifacts have toured the U.S. Premier Exhibitions organized this particular tour which was apparently concurrent with the 2013 Year of Italian Culture.

What strikes me when considering the abrupt stoppage of Pompeian life on August 25, AD 79 is the event’s suddenness. There had been plenty of earthquakes, some estimated to have been as high as a seven on the Richter scale. But earthquakes were a fact of life. An unsettling inconvenience. Mount Vesuvius was five miles away, but nothing to worry about.

Life was good in this prosperous city of approximately twenty thousand people. People enjoyed themselves. We know this from their artwork and material remains. The Three Graces of Beauty, Mirth and Abundance in the featured image bestowed all society could desire. Fertility of the Fields. Beauty in the Arts. Harmony in Society. 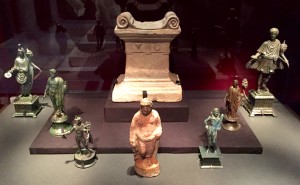 Citizens paid proper respect to the household gods. From left to right in the above picture. Genius with his companion snake bestowed procreative strength to the head of household. Jupiter protected the state. Mercury, the god of merchants, Ascelepius the god of medicine, Hercules, the god of strength, and Fortuna the goddess of luck kept everyone safe while Lares protected their homes. 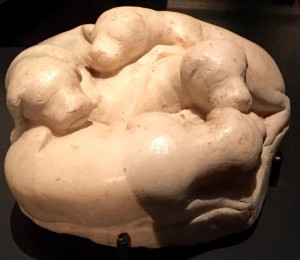 Small dogs were popular pets. This sculpture of four small dogs is from a single piece of marble. 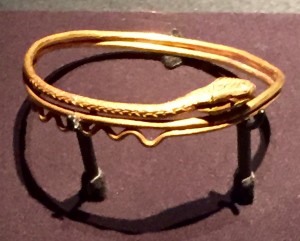 Jewelry like this gold bracelet with a serpent’s head above its tail adorned the wives and daughters of wealthy merchants. 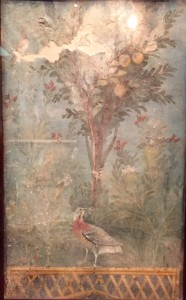 Idealized gardens were an important aspect of the household. This fresco encapsulates the concept of paradise with its pigeon and peach tree. 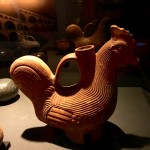 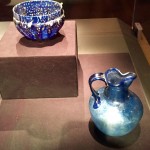 The useful could also be beautiful. A pottery vessel shaped like a chicken. Jugs and bowls made from blue glass sourced in the Po Valley.

Pompeii was a trading center, exporting wine and a product known as garum throughout the empire. Garum was a sauce made from the crushed intestines of raw tuna and Moray eels. It added a sharp, salty taste to otherwise bland foods and was mass produced at the Sarno River. The mosaic below bears the inscription: Flower of Scaurus. Mackerel garm from the factory of Scaurus.

And then, Mt. Vesuvius erupted and life stopped in mid stride. 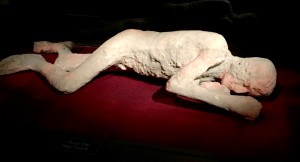 Twelve feet of volcanic rock and ash poured over the city. The heat – up to 570ºF killed at least two thousand people and solidified their bodies as they fell. The body casts are made by pouring resin into the body cavities. [Sidebar: Originally excavators poured plaster into the cavities.]

There is a special poignancy in these preserved remains. More than viewing mummies or photos of skeletal remains, these people are as they fell rather than how they were arranged after death. These were people minding their own business, killed without warning.

History is a neutral example of stories, exploits, and tragedies. Pompeii’s history reminds us that life is brief and people are seldom ready to leave it.

The Pacific Science Center was constructed by the federal government as part of the 1962 Seattle World’s Fair, and became a private, not-for-profit entity after the fair closed. Today it is an official City of Seattle Landmark.

Explanation of the Three Graces taken from the Metropolitan Museum of Art. Here.