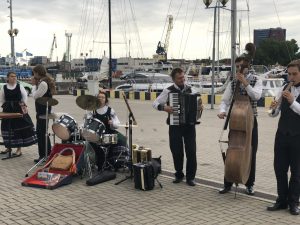 Palanga is on the shore of the Baltic Sea and the busiest summer resort in Lithuania. In addition to seaside activities, Palanga is famous for its Botanical Garden and the Amber Museum located within a Neo-Renaissance palace museum completed in 1897.

The garden covers just over 247 acres with forests of pine and fir trees, and 370 native plants augmented by 250 imported plants — some from as far away as Berlin. There are also sculptures that tell a bit of Lithuania’s story, beginning with the tale of

EGLĖ, QUEEN OF THE SERPENTS 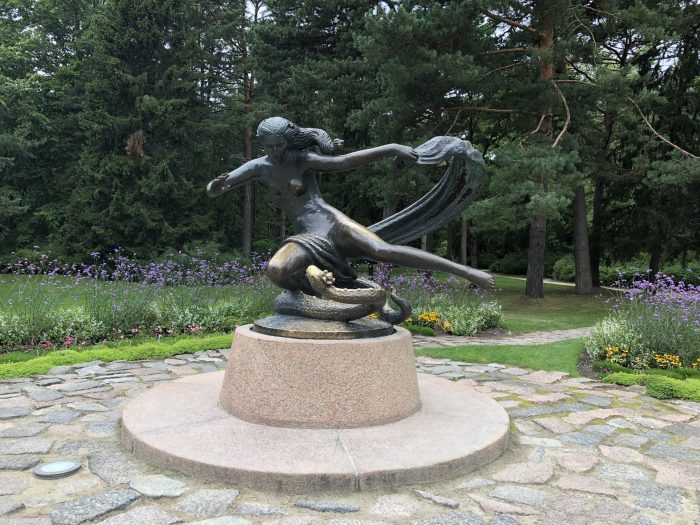 Warning: This story does not have a happy ending.

Eglė lived with her parents, three sisters, and seven brothers. On day she and her sisters left their clothing on the bank while they swam in the sea. When Eglė came out of the water, there was a serpent sitting on her clothing. The serpent tells her she must agree to marry him or he’ll remain on her clothing. Eglė agrees, gets dressed and goes home.

Soon snakes begin showing up at the house to escort Eglė to her bridegroom. The family tries to trick the snakes, first dressing a sheep and later a cow as a bride. Their tricks fail, and reluctantly they give up Eglė.

When Eglė arrives at the shore, she sees a handsome young man who is under a spell. He appears as a serpent during the day and a man at night. Eglė happily marries him and lives with him at the bottom of the sea. They have three sons and a daughter. Eventually, Eglė wants to visit her family. Her husband agrees and gives her a secret charm to say when she returns. If he’s alive, the sea foam will be white. If not, it will be red.

Eglė’s visit goes well until she’s ready to return to her husband. Her brothers pressure her to give up the charm, and eventually trick it out of her daughter. The brothers go to the shore, recite the charm, and kill Eglė’s husband. When Eglė reaches the shore, the sea foam is red. Eglė turns her children and herself into trees at the shore. 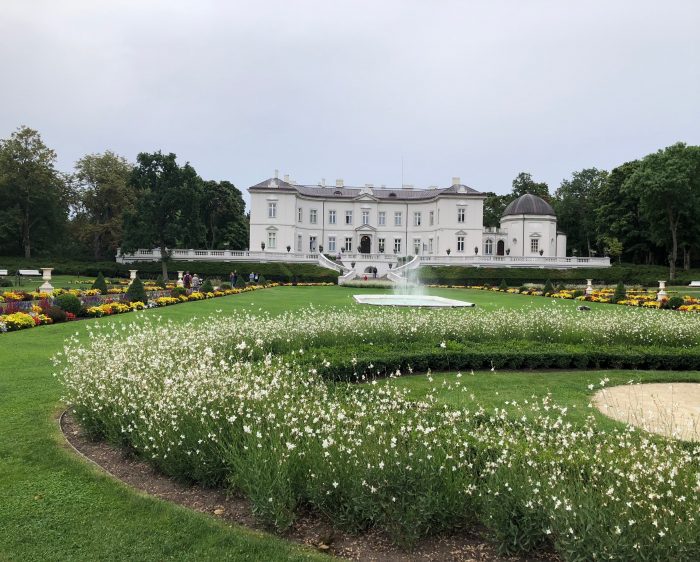 The Amber Museum is housed within the palace built by Count Feliks Tiškevičius and his wife Antanina Koržbok-Loncka. At the time of its completion the palace was a thoroughly modern building with sewage facilities, running water, central heating, and a dumb waiter from the kitchen to the dining room. The palace fell into disrepair until its restoration in 1957. 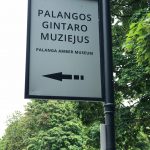 The entrance to the museum is through the former kitchen. There are 28,000 amber pieces in the collection, with about 4500 on exhibit. The amber trade has been part of Lithuanian history since pre-historic times. At the end of the 18th century Lithuania was the center of the Russian amber industry. 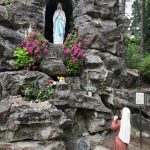 After visiting the palace and museum, we went back into the Botanical Gardens and came upon a shrine to the Virgin Mary. When Christianity was forbidden, people came here to pray. Today Mary’s statue is no longer hidden. 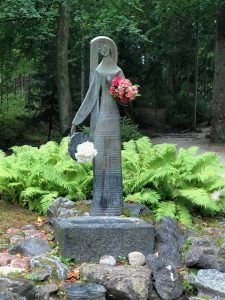 Near Birutė’s Hill is a statue honoring Birutė, a pagan priestess. According to legend, Birutė tended ceremonial fires until Kęstutis, the Grand Duke of Lithuania, came to make her his wife. The chronicles say she refused, so he took her by force. Birutė and her sons are credited with introducing Christianity to Lithuania.

Mansion of the Palanga Counts Tiškevičiai