Darn – I missed it. Saturday, June 4th was National Old Maid’s Day, still on the list of June holidays and observed with reluctance by writers who rush to assure us modern women do quite well without marriage. And yet, I think the day shouldn’t pass completely unnoticed. 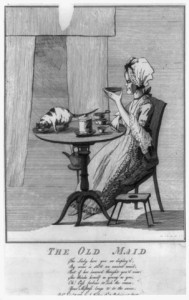 Up until the 21st century, never married women were looked upon with pity. How dreadful to pass the age of 25-30 and dry up. Some women were thrust into the situation by circumstance — various wars having removed potential partners. Others declined a marriage career or were “unlucky in love.” Until the late 19th century, such women depended on the largesse of family members and became that family fixture known as the ‘maiden aunt.’ 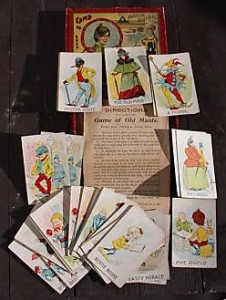 An already bad situation was made visually worse by a popular Victorian card game called, “Old Maid.” Sometimes a garishly illustrated deck was printed for the game, but any deck of playing cards could be used if three of the queens were removed. The object of the game is to pair and get rid of all your cards until one luckless player is left with the “old maid.” Allegedly “Old Maid” derived from an ancient gambling game in which the loser had to buy the drinks. So men played “Old Maid” to see who paid for the next round.

Umm…I’m guessing the game had a different name then. 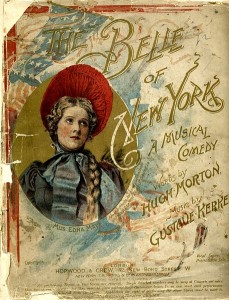 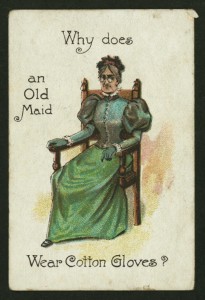 The Belle of New York, an 1897 musical later made into a Fred Astaire movie tells the story of a Salvation Army gal who reforms a spendthrift and finds true love.

One of the songs, “I’m a Philosopher” poses the question

Why does an old maid wear cotton gloves?

I’m a philosopher. I’ve been many places,
I’ve studied human nature and a lot of human faces;
I have always wondered why a woman tightly laces,
And why an old maid wears cotton gloves.
The staff of life we all know is bread,
And when a fellow gets “spliced” well, he is wed,
And then when he “croaks” he is dead;
Still, why does an old maid wear cotton gloves?

Don’t you know? Can’t you guess?
Too hard? No bids?
Why does an old maid wear cotton gloves?
Why, because she has no kids. [Kid gloves, that is]

Nearly 420,000 American men died during World War II, leaving their wives and sweethearts alone. After the war, communities organized various socials and dances so returning soldiers and single women could meet. But many women remained unattached.

On June 4, 1948 Marion Richards went to the shirt factory in Norristown, Pennsylvania. She placed a corsage of roses and daises on the work tables of unmarried women aged 30 and older. When asked why, Richards responded the flowers were an invitation to an “Old Maids Day Luncheon.”

Richards later said, “There are days for most everybody and everything but no one ever gave a thought to poor old maids except when there was a task to be done. So I decided to do something about it and chose this day especially for them.”

Note: The shirt factory mentioned above may have been the Tyson Shirt Co., now transformed into Tyson Shirt Factory Lofts luxury apartments.