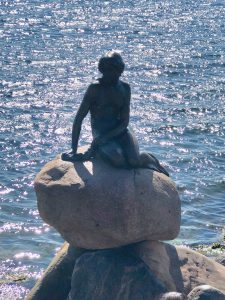 Possibly the most famous site in Copenhagen, the bronze Little Mermaid sits on a rock at the shoreline of the Langelinie Promenade. The eternally young mermaid personifies Hans Christian Anderson’s somewhat gruesome well-known tale of a young mermaid who gave up her pleasant life underwater to win her true love. You can read the story here

The bronze statue by Edvard Eriksen has its own history. In 1909 Carl Jacobsen, son of the founder of Carlsberg Brewery, attended the Royal Copenhagen Ballet, saw the story of the Little Mermaid and commissioned the statue completed in 1913. In recent history, the statue has been vandalized several times. In 1964 the head was stolen. It was never recovered and a new head replaced the original. In 1984, the right arm disappeared, but was returned. In 1998, the head was again stolen, and turned up later. Other incidents have also occurred, but nothing detracts from the statue’s enduring popularity among visitors. 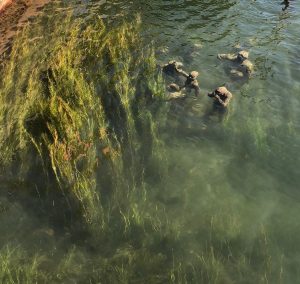 The Little Mermaid isn’t alone. Undersea creatures seem to be an enduring theme in artistic renditions of folklore. There is, for example, a group of bronze sculptures standing underwater at the Slotsholm Canal next to Højbro Bridge. The statues by Sunset Bonnen and “unveiled” in 1992 show a merman and his seven sons, each holding out their arms begging Agnete to return. According to legend, there was once a peasant girl named Agnete. As she passed by the water, a merman appeared. It was love at first sight. Agnete joined the merman at the bottom of the sea and remained there eight years, during which time she gave birth to seven sons. One day she heard church bells from the surface and realized she was homesick. Agnete’s husband gave permission for his wife to attend a church service provided she return directly afterwards. Agnete never returned. 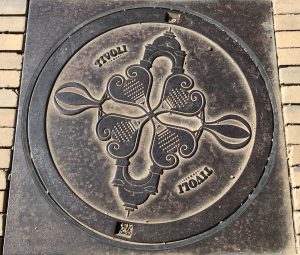 The highlight of my brief time in Copenhagen was a visit to the famed Tivoli Gardens, a place I’ve always wanted to visit. Tivoli Gardens are a cornucopia of amusements. There are rides, of course, the oldest being a wooden roller coaster built in 1914. It still runs and is one of only seven roller coasters in the world that has a brakeman on every train. 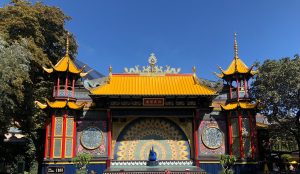 Tivoli has entertainment, for example, the Chinese style Pantomimeteatret 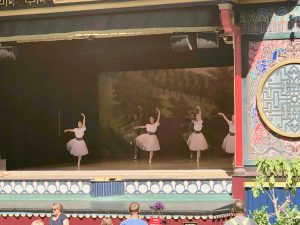 that opened in 1874 with the motto: Shared Joy With the People. It’s the oldest building in the garden and it mechanical peacock tail still opens the “curtain” on the stage.

Georg Carstensen came up with the concept of Tivoli Gardens which he wanted to build outside Copenhagen’s city walls. At the time, city walls were becoming obsolete and many people lived in poverty amidst the wealth generated by Copenhagen’s port trade. King Christian VIII was concerned about civil unrest, and not initially responsive to Carstensen’s idea. Finally the impresario convinced the king that “when the people are amusing themselves, they do not think about politics.” 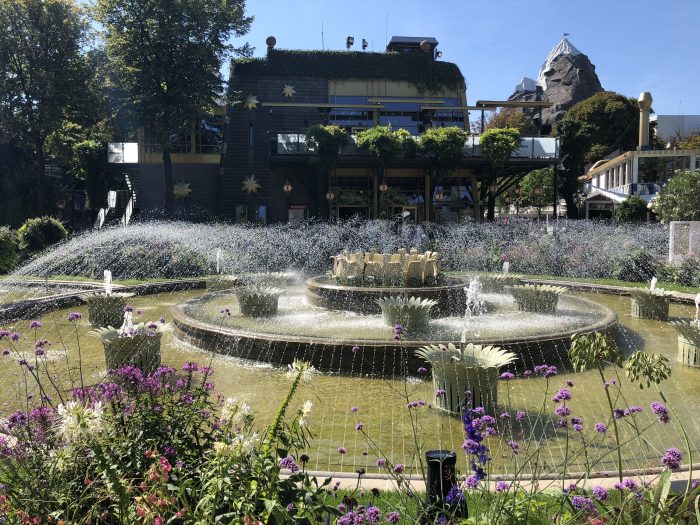 The king leased Carstensen land outside the city ramparts. Carstensen built his amusement park with food stalls, concerts, park like settings, merry-go-rounds, a theater and even a light show that used glass lighting to illuminate the gardens.

I can’t help but think that Tivoli Gardens provided some of the inspiration for Walt Disney as he created Disneyland in Anaheim, California. The Tivoli website notes Walt paid a visit to the Gardens in 1951. Disneyland opened in 1955.