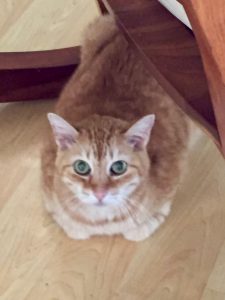 I’m not sure if we adopted Hoku or he adopted us. He showed up on our back lanai (patio) one evening as a small kitten. He looked like a minature version of one of our cats. (At the time we had two cats, two dogs, and two daughters at home.) The girls dubbed him Son of Scamp, in honor of our existing yellow kitty.

I don’t know where he went during the day, but he showed up each evening. The girls fed him, named him, and began a campaign for full adoption. Did I mention he has large eyes?

We began moving the food dish inside the house, until finally we closed the door. The kitten found his ‘safe place’ in the hall closet, emerging at night to wander. The girls left their bedroom door open, and sometimes he sauntered through the room, much to their delight.

Time passed. The girls moved out. Hoku stayed. He remained a ghost cat, feeding at night and seldom seen in daylight. Snagging him for vet visits or flea applications required stealth.

Hoku is about ten now. Over time he’s become more visible, wandering around the house and joining the other cat and the dogs for food and treats. He has a musical meow. He allows me to view him more often, which is how I found out he was sick.

Never a large cat, Hoku became downright skinny. But his appetite was fine. Turns out, this is one of four classic symptoms of feline diabetes. When I took Hoku for his regular six month check, the vet ordered a blood test. Hoku scored a reading over 400 mg/dl. This is not good. So we set him up for a glucose curve to see what was going on. 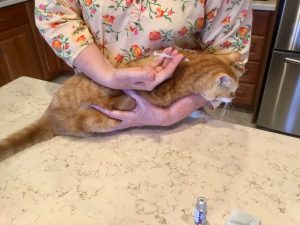 Hoku has diabetes. I inject four units of insulin into his scruff every morning after my first cup of coffee. Prior to that I can’t read the tiny dosage lines. This picture is staged, and doesn’t demonstrate the correct way to administer the insulin. But it gives an idea of our new morning routine.

Each morning Hoku joins the others waiting for breakfast, forgetting what happens first. Breakfast is served immediately after the injection. I like to think he forgets about the shot he just had. 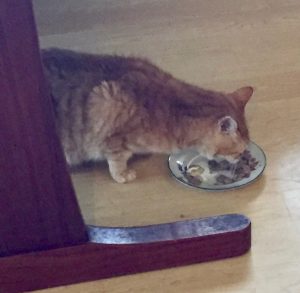 Never in my wildest imagination did I expect to meet a diabetic cat, but I’m not alone. The pharmacy I use has a protocol for cats. He has his own account listing as Hoku (feline) Wagner-Wright, and I can call in his refills.

Is Diabetes Common in Cats?

It turns out somewhere between 0.5 and 2 per cent of the feline population has diabetes. It’s the second most common endocrine disease in cats. One of the key factors leading to feline diabetes is obesity, and the rates of diabetes have risen along with the increase of overweight cats.

Hoku didn’t have a weight problem, but he fit several other common symptoms. These include:
Age – Diabetes is more frequent in middle aged to senior cats
Male – Hoku started life as a male
Neutering – Presently, Hoku is neutered
Orange coloring – I’m not sure why color has anything to do with it, but Hoku is orange. 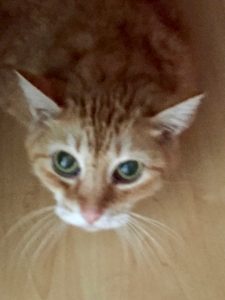 Natural insulin is produced in the pancreas. It attaches to cells and enables them to absorb glucose. Diabetes occurs when the body either can’t produce or can’t respond to the insulin which results in the following symptoms:

Since Hoku started his insulin injections, he’s put on weight and become more active. He still likes to hang-out in the closet, but he also enjoys getting pets in the evening.

My Cat Has Diabetes