I often visit London and stay in Kensington, usually combining research and family adventures. In the past we’ve eaten lunch at various neighborhood pubs, particularly the Gloucester Arms. So, naturally the day after our arrival we made our way to our favorite pub on Gloucester Road, only to find the menu had undergone a drastic change, leaving few gluten free options. As I recall, there were cheese toasties and one other minor item. Since most pubs in the area have the same menu, this presented a problem. 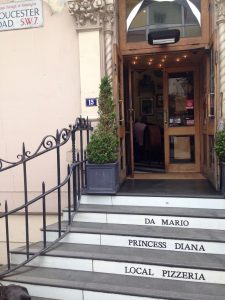 Happily the solution to our dilemma was across the street. We’d often noticed Da Mario. It was reputed to have been one of Princess Diana’s favorite places. But it didn’t seem like a place for a quick lunch. On the other hand, I was hungry and decided to check it out.

Da Mario is a simple neighborhood cafe serving pizzas, pastas, and antipastos. Even better, they make gluten free options for almost everything on the menu. The price is reasonable and the food outstanding. I went every day I wasn’t t the library. 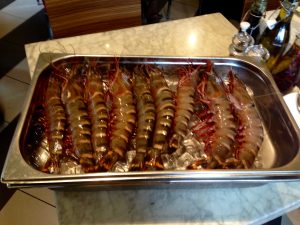 At Da Mario’s everything is fresh including the langoustines (Metanephrops Andanicus). These warm water crustaceans are harvested in Mozambique, Tanzania, and South Africa. The langoustines harvested from northern waters are considerably smaller, so when I first walked into Da Mario’s and saw these specimens resting on the table I was impressed. 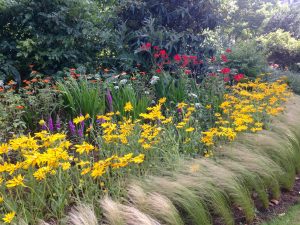 The weather was chilly the first week which was just as well since I was in the library almost every day, but on the way back home we had another few days in London. This time, it felt like summer, and I happily spent some time among the flower beds of Kensington Gardens. The park is one of eight Royal Parks in London and covers 265 acres. There’s nothing so pleasant as formal beds filled with English flowers. 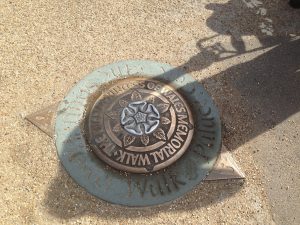 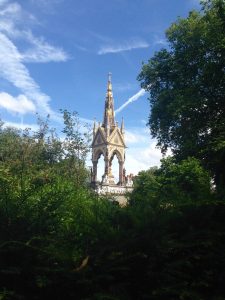 The cupola of the Albert Memorial peeks through the trees in this photo. Queen Victoria commissioned the Gothic Revival style monument to her husband which was unveiled in 1872. The memorial took ten years to complete at a cost of £120,000 which was met by public subscription. 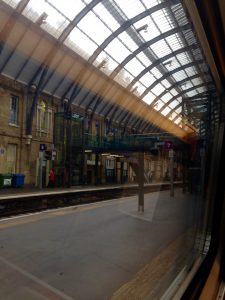 After a week at the British Library, it was time to move on to the National Library of Scotland in Edinburgh. The departure point for all trains going north is Kings Cross Station.

The term Kings Cross comes from a long ago statue of George IV that once stood at the crossroads of Gray’s Inn Road, Pentonville Road, and what is now Euston Road. The statute came down in 1845 and the first rail station went up in 1852.

After World War II, the area became an industrial wasteland and Red Light District. But in 2005 refurbishment of the station began to revitalize the area. The £500 million project restored and reglazed the arched roof (shown here) and constructed an open plaza of shops and restaurants. In 2007 the Eurostar terminus located at nearby St. Pancras International Station. Four years later the University of Arts, London moved into the area, bringing the new energy and student life. 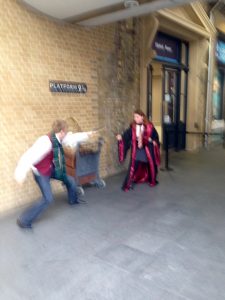 The most famous sight in Kings Cross is Platform 9-3/4s – the platform where Harry Potter and other young wizards boarded the train to Hogwarts. Located near the Travel Center and Information Kiosk, the platform draws Harry Potter fans from around the world. And it is here that I said farewell to London and took my laptop north. 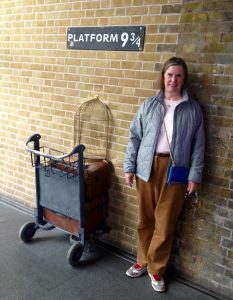 One thoughts on “London Highlights”