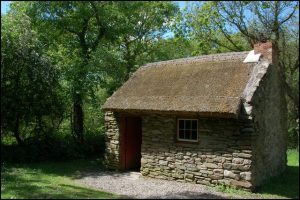 Once upon a time, most people lived small, but they weren’t necessarily happy about it. This one room cottage is part of the Ulster Folk Museum in Northern 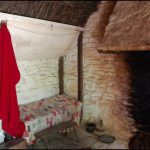 Ireland. It looks charming with its thatched roof and graveled pathway. Inside we see a sitting/sleeping area next to the fire, with kitchen materials close to hand. Smoke stains are clearly visible by the fireside.

In summer people could expand the living area by going outside. In winter, this wasn’t an option. 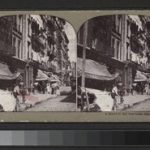 People working in the cities had their own small cramped living spaces – too hot in summer; too cold in winter.

These weren’t dwellings for one or two people. They housed multi-generation families, and the occasional boarder. 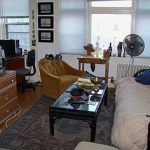 Urban renters still find themselves crowded into studio apartments of less than 500 square feet, where as Gene Tempest observed, small is not necessarily as wonderful as Tiny House advocates make it seem.

I bring this up because the TINY HOUSE MOVEMENT seems as popular as ever. Enthusiasts find it to be better for the environment and more freeing for the occupant, most often a single person or a couple. Freed from the financial tyranny of a mortgage, people can live off-grid.

Before I continue, I need to draw a distinction between an official Tiny House a person chooses to live in, and structures people refer to as “tiny houses” that are erected as temporary housing for people who have lost their homes to natural disasters. Residents displaced by the on-going volcanic eruption on Hawai`i Island have temporary housing erected at Pahoa Sacred Heart Church. Smaller than a “tiny house,” each unit has 120 square feet. Units are insulated and have electricity. Many include a bed, desk, and chair. Residents have central kitchen and bathroom facilities. The units aren’t intended to be long term housing and are a far cry from the Tiny House structure in the video below. 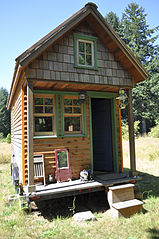 By definition a Tiny House is any house designed to be a permanent dwelling that is smaller than 500 square feet, most often between 100 and 130 square feet, and may or may not stand on a distinct parcel of land. Some communities allow them to share a piece of land with a standard house on it; others don’t. Few neighborhoods allow a Tiny House on a single parcel. Building codes frequently specify a minimum of 1000 square feet, as well as hook-ups for water and electricity.

Technically, Tiny Houses aren’t RVs or Mobile Homes. In fact, luxury RVs have an astonishing array of interior features that wouldn’t fit in a Tiny House. They also have a much higher price tag.

Tiny Houses share one feature with Recreational Vehicles. They rest on a trailer chassis and are on wheels, ready to hit the road.

The width of a Tiny House is fairly standard, because of road conditions when the house is moved. Designs tend to favor a ground floor with a loft. One set of plans called for the house width to be 6 feet, ten inches, with a length of 16 feet, two inches. The ceiling height on the first floor is six feet, six inches. In the loft it’s 2 feet, 8 inches. But since that’s the primary sleeping area, perhaps the occupant can just slide in from the stairs. 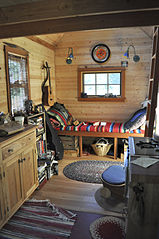 The first floor is cozy, in a bears in the woods sort of way. A porch can extend six feet or so to provide more living area. The kitchen area is four feet, six inches by 4 feet. The great room can be 8 feet by six feet, six inches. And the bathroom is 5 feet, 6 inches by 2 feet. For visual fairness, I’ve included a video tour below of one such house.

In a perverse way, I’m fascinated by Tiny Houses. I think the feeling is left over from visiting my friend when I was about eight years old. Her family had one of those round trailers that they took on vacation. The rest of the time, it sat in the driveway and could be used as a sort of playhouse. I thought the small size of everything was enchanting. I too was small at the time.

But like Alice in Wonderland, I’ve grown quite tall. And I’ve accumulated various items, like furniture. Before World War II, people wished for housing with bedrooms and indoor plumbing. Nowadays people wonder what it might be like to fit their lives into 150 square feet. I don’t suppose we’ll ever be content with our housing options.