I’ve been recharging my creative batteries – away from home without an agenda.
Specifically, the Handsome Bloke and I visited what writer Patrick O’Brian called the “far side of the world,” and our itinerary identified as Lima and Machu Picchu in Peru and the Galapagos Islands in Ecuador. 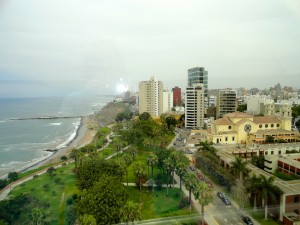 In 1857, Miraflores became an official district of Lima, but it’s history reaches back to pre-Incan times. An eighteen-acre archeological site dominates an upscale residential and commercial area. 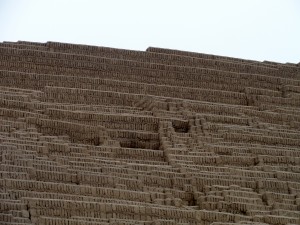 Huaca Pucllana is dated at the year 500 in the Common Era. Historical ruins are called huacas. Pucllana is the word for temple. Hence, Huaca Pucllana. Another interpretation says pucllay is a word in the Quechua language meaning game. So the site is one where ritual games took place. 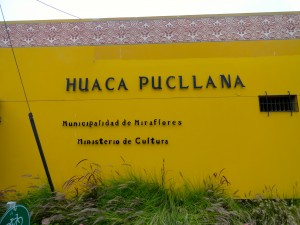 Huaca Pucllana was probably an administrative and cultural center. The dominant structure is a large adobe clay pyramid surrounded by seven staggered platforms. 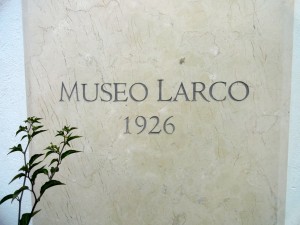 Archeological digs look rather stark without material evidence. Fortunately, the Museo Larco, founded by Rafael Larco Hoyle (1901-1966) in 1926, is a short drive away. The museum was founded in Chiclin, but moved to Lima in the 1950s where it is in what was once the Luna Cartland family house, built in 1700. The most recent museum renovation was completed in 2010, making it a world class museum.

Rafael Larco Hoyle collected the museum contents between 1933 and 1941.

The Spanish colonial period began in 1532 when Francisco Pizarro (c.1471-1541) captured The Inca Atahualpa and told the native people that if they wanted him to return The Inca, they had to fill a room with gold. The people met the demand. Pizarro executed The Inca in 1533, the same year he completed his conquest and entered the Incan capital city, Cuzco.

In 1535, Pizarro founded Lima as the City of Kings. I can only presume he meant either himself alone, or perhaps all the conquistadors. Pizarro might have been a conqueror, but he was not without rivals. One, Diego Almagro, mounted a rebellion. Pizarro defeated and excuted his enemy after the Battle of Las Salinas, but he neglected to kill his rival’s son, who in 1541 assassinated his father’s killer. Pizarro’s remains are housed in an ostentatious chapel near the entrance of Lima Cathedral.

The Palace is constructed over what was once a large native bural ground and is still the seat of government and the residence of Peru’s president. There is a ceremonial guard. The guard changes every hour with a full-blown ceremony, complete with band concert, at noon.

In 1968, UNESCO named Lima’s historical center as a World Heritage Site due to its originality and high concentration of historic monuments built by the Spanish. In particular, UNESCO mentioned the intricate carved wooden balconies.

The balconies were designed so women could see out, but no one outside could see onto the terrace. The balconies survive due to the dry climate – only about three inches of rain annually.

The present Cathedral has fourteen side chapels, in Spanish baroque style. The nave is done in a simple fashion.

An unusual aspect of this cathedral is the placement of the transept to enable more high ranking people to be buried near the gold-plated high altar. 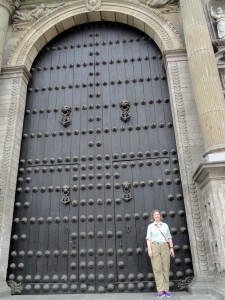 Thought I’d throw in this picture of me at the cathedral door – purely in the interest of scale.

The Cathedral and Monastery of San Francisco, located near the historic plaza, was consecrated in 1673, completed in 1774, and became a UNESCO World Heritage Site in 1991. It contains an extensive complex of catacombs, because it was a city burial site until 1808 when the city established a cemetery outside Lima. About 25,000 people were buried here. Families could establish their own “niche”, but no remains were untouched in perpetuity. They had to be moved for new occupants. Archeologists discovered the catacombs in 1943.

There are other interesting artifacts on the site. The monastery maintained an extensive library, still in use by authorized persons. I was surprised to see that no effort has been made to house the old books in a climate controlled area – and they seem to be in good condition. There are also a number of paintings. One that I found especially interesting is the Last Supper by Diego de la Puente. We all know da Vinci’s illustration. De la Puente traveled throughout Peru. When he painted his monumental art piece, he included foods unique to Peru – chilies, potatoes, and guinea pigs. Also, he painted the devil hovering by Judas, the betrayer.

All this sightseeing made me thirsty and happy to return to the Belmond Miraflores Park Hotel – and its delicious ceviche and well stocked bar.

See you next week.

Huaca Pucllana More information about what life may have been like here.

One thoughts on “LIMA – City of Kings”