Twice a week I treat myself to a morning walk around the perimeter of Liliuokalani Gardens, one of Hilo’s best known landmarks. On a perfect morning, the combination of morning sun, glittering sea, and the emerald lawn of the Japanese Garden are the perfect renewal for body, mind and spirit. 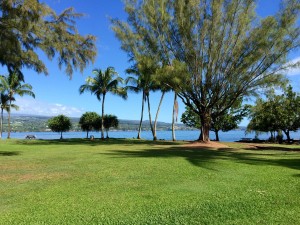 Liliuokalani Gardens sit on 30 acres on the Waiaikea Peninsula of Hilo Bay. Within that acreage is a 17 acre Japanese Garden designed in the Edo Style. The original plan for the gardens envisioned a “strip of land that stretches in front of the kerosene oil warehouse and on to the harbor line bordering Coconut Island.” The kerosene oil warehouse is long gone, but Coconut Island, now connected to the Gardens by a bridge, extends the area. 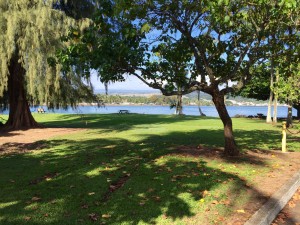 The 1917 Report from the Legislative Committee on Public Lands described the area as one that “After and careful consideration we find that the object of the bill is to provide a park in the suburbs of the City of Hilo where can be constructed gardens surrounding silvery lakes and about rock-bound inlets of the sea of great beauty on the order of Japanese landscape gardening that will add greatly to the beauty of this approach to the city and further the txt land desired is of little value for other purposes.” 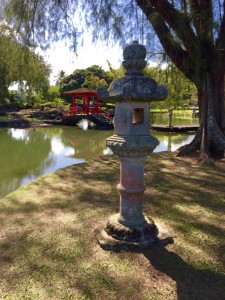 In 1917 Queen Liliuokalani dedicated the Gardens to Japanese immigrants who came to Hawai`i to work on the sugar plantations.

Interest in Japanese garden design for public spaces in Hawai`i may have begun with a 1914 visit to Japan by people from Hawai`i with an interest in economic development and beautification projects. 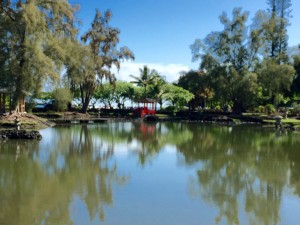 The Japanese Garden is said to be the largest Edo style garden outside of Japan. The central water feature is Waihonu Pond which is surrounded by foot bridges, traditional gazebos, weeping willows, azaleas and a bamboo grove. A traditional Japanese tea house called Shoran is also on the grounds. The 15th Grand Tea Master of Urasenki donated the tea room. The Urasenki Hilo Association conducts tea ceremony classes here in both Japanese and English. 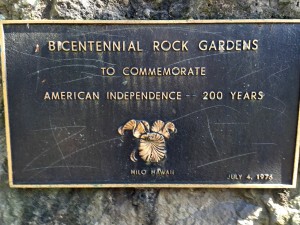 In honor of the United States Centennial Celebration, a traditional rock garden joined other garden features. 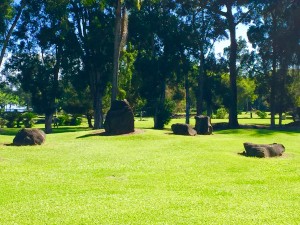 Liliuokalani Gardens is the center for numerous community events, including the annual Queen Liliuokalani Festival honoring the monarch’s birthday in September. The one day festival opens with the presentation of ho`okupu with members in attendance from the Queen Liliuokalani Trust, the Royal Order of Kamehameha, the Ka`ahumanu Society, Hale o Na Ali`i and hula halau.

To give you a sense of what the festival is like, I’ve included a video by Big Island Video News from the 2008 Festival

But on a quiet morning, the festival seems far away. And the road into Liliuokalani Gardens beckons walkers to begin their day. 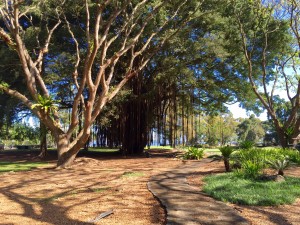