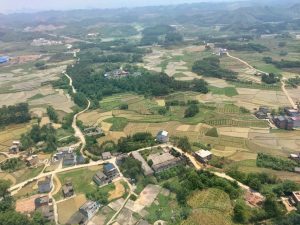 The view approaching Guilin Liangjiang International Airport revealed a landscape of rice paddies, karst, and the Li River. [Karst is a term describing the limestone cylinders pushing up from the ocean floor.]

Guilin sits on the west bank of the Li River and is part of the Guangxi Zhuang Autonomous Region. About a fourth of the population is from “minority groups.” Guilin translates as “Sweet Forest of Cassia” in honor of the Cassie flowers that bloom in the fall. The city is a popular tourist destination for Chinese and foreign visitors, its topography a living example of Chinese art works. 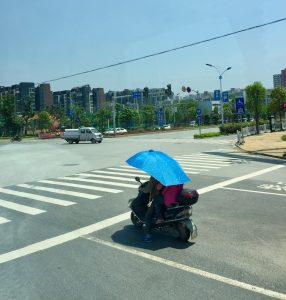 ourists are usually on their way to Yangshuo which had no hotels until very recently. So, they stayed at the Sheraton. Our plan was to grab a quick lunch and then start the two hour journey to Yangshuo. If you make a similar trip, try not to eat at the Sheraton.

According to local custom, Guilin citizens break for a siesta after lunch. Recently a school tried to break this pattern by continuing the school day until about 3:00. Parents protested there would be no one to pick up the children. The school conceded and returned to a siesta schedule. 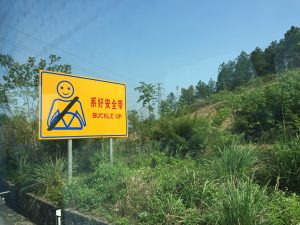 The drive to Yangshuo was long but scenic until we arrived at the Banyan Tree Yangshuo, a lovely property opened in 2015 as a resort facing the Li River. 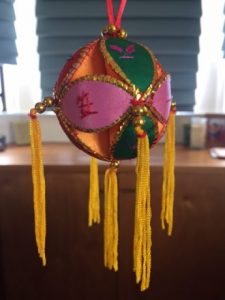 Young women in traditional dress greeted us with local songs greeted us and bestowed a colorful “love” ball around our necks.

Traditionally, young girls made love balls to throw at a boy in order to gain his attention. If he caught the ball, or even touched it, the couple married. Otherwise, the boy let the ball fall to the ground. Today “love balls” are used for greeting – but you can’t ask for an extra one. 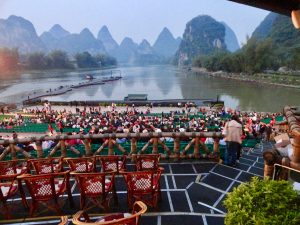 That evening we attended the Liu San Jie Impression Light Show which takes place on the bank of the Li River with karst formations as a background. Zhang Yi Mou, director of the 2008 Beijing Olympics Opening Ceremony, created the light show which opened in 2004. Over 600 local people perform in the show. The seating area holds 2500 people.

The show tells the love story of Liu Sangie. A warlord falls in love with her, but she’s already in love with a farmer’s son. The warlord kidnaps the girl, who is in turn rescued. She and the farmer escape to a happy ending. 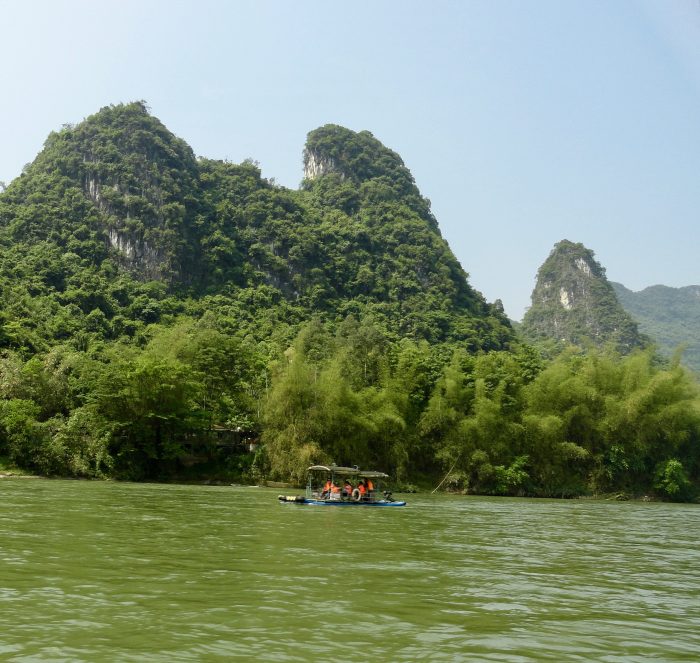 Floating down the Li River on a raft is another popular activity. I thought we would be on a a traditional raft for an ambient float. Alas, the rafts are motorized on PCV pipe materials. Nevertheless, the scenery is breathtaking. 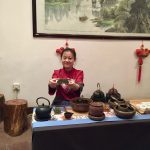 Sadly we had only one night in Yangshuo, so after disembarking from the raft we went to the next scenic spots. Our first stop: the Guilin Tea Research Institute founded in 1965. Four hundred years ago the area was Ming Dynasty Royal Tea Garden. 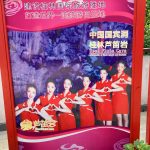 Our last stop in Guangxi was Reed Flute Cave also known as the Palace of Natural Arts. The cave’s named for the reeds which grow near it, said to be good for making flutes. The natural limestone cave is over 180 million years old and has long been an attraction for travelers. More than 70 inscriptions date back to the Tang Dynasty.

Over time, the cave fell into disuse, but was rediscovered by refugees fleeing Japanese troops during World War II. The government installed LED lights, projector screens and a sound system and opened Reef Flute Cave as a tourist attraction in 1962. The space is also used for various formal events.The fantastical lit formations make it hard to remember to watch the pathway which is both slippery and uneven. 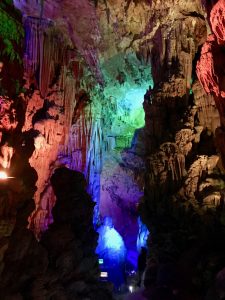 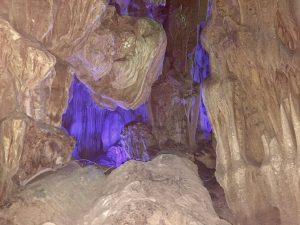 One thoughts on “KARST FORMATIONS AT GUILIN & YANGSHUO”