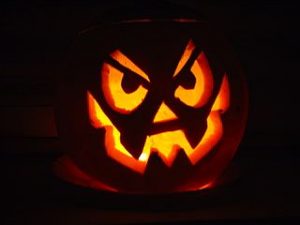 Jack-o’-Lanterns carved from orange pumpkins are a Halloween staple. Traditionally the pumpkin is cleaned out, it’s shell carved into a scary face, and a candle placed inside. As simple or as elaborate as the artist decides.

But why do we call them Jack-o’-Lanterns? Why not Carved Pumpkins or Scary Faces in an Orange Vegetable?

There are many stories about the origin of Jack-o’-Lanterns. The one I’m going to share is the Irish tale of Stingy Jack. The name “Jack” has been a general name for any unknown boy or man since the sixteenth century, so we don’t know much about Stingy Jack, other than he was cheap.

So Jack thought, why should I spend the money now? I’ll put the coin into my pocket next to my silver cross. That way the Devil can’t change himself back, and I’ll have the money when I need it. The Devil, naturally, didn’t care for the arrangement. Eventually Jack agreed to free him, but only on certain conditions. Jack stipulated the Devil couldn’t bother him for a year, and that if Jack died, the Devil couldn’t have his soul. Agreed.

Jack and the Devil went their separate ways. The next time they saw each other, Jack persuaded the Devil to climb a tree to pick some fruit. I can only say Jack must have been a charmer, because the Devil climbed the tree, and while he was in the branches, Jack carved a cross on the tree trunk, so the Devil couldn’t get down again. Eventually, Jack agreed to let the Devil come out of the tree, provided the Devil didn’t bother him for ten years. Agreed. 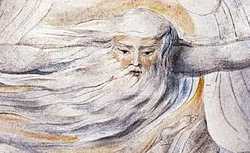 A short time later, Jack died. When he got to the Gates of Heaven, God rejected the trickster. And the Devil got his revenge. He’d agreed not to claim Jack’s soul. So he sent Jack into the night with only a burning coal for light, saying Jack could find his own hell. Jack carved out a turnip in which to carry the coal, and has roamed the earth ever since. The Irish called him “Jack of the Lantern,” now shortened to “Jack o’ Lantern.”

You might wonder why Americans carve pumpkins instead of turnips. When immigrants arrived with their stories and customs, they made adjustments. Pumpkins are plentiful in America, larger than turnips, and much easier to carve. By the 1850s carved Jack-o’-Lanterns were a standard seasonal decoration.

The Legend of Stingy Jack