Red and Green are the colors most often associated with Christmas and the month of December. Freshly cut evergreen trees are green. Santa Claus wears the same red suit every year. I sometimes wonder why he delivers so many items of clothing but never updates his look.

For thousands of years people in European cultures have used evergreen plants to decorate their homes and other buildings. In ancient Rome, citizens gave holly wreaths as gifts in celebration of Saturnalia, their annual feast for the god Saturn. The exchange of holly was a way to wish friends and family a long life, peace, and good luck.

Saturnalia was an important festival, so important early Christian church leaders gave up trying to eradicate it. Instead, they set the date of Jesus’ birth on December 25th and adopted the customs of gift giving and holly wreaths.

In the northern hemisphere, December is the beginning of dark, cold winter days. Winter Solstice is the day with the longest night and shortest daylight hours. This year it takes place on December 22nd. In a world without electricity or central heating, winter darkness could be terrifying. What if the world never became bright again?

The presence of evergreens – whether as trees, holly, or mistletoe – promised that spring would return.

During the Fourteenth Century it was popular to present Paradise Plays about Adam and Eve and their Fall from Paradise. Among the required props was a tree to represent the Tree of Good and Evil. Adam and Eve were allowed to eat any fruit in Paradise except the fruit from the Tree of Good and Evil. When Eve accepted the devil’s advice, and ate the fruit, she recognized good and evil. Being a generous soul, Eve then offered the fruit to Adam, who willingly ate it.

The play master needed to place fruit on an evergreen tree. Since most people thought the forbidden fruit had been an apple, the play master tied red apples onto the tree.

The moral of the story was that although Adam and Eve brought humanity into sinful lives, on Christmas the Virgin Mary gave birth to Jesus who erased the sin. 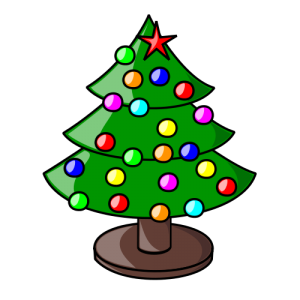 It’s a long way from Roman Saturnalias and Medieval Paradise Plays, but the colors of green and red still dominate December. Green still retains its symbolism as the color of health and new life. Red remains the color of emotion, love, and passion.

Illustration of Christmas tree in the Public Domain. Wikimedia Commons.

“The Colors of Christmas.” Here.

“The Importance of Christmas Colors.” Here.

One thoughts on “HOLIDAY COLORS of RED & GREEN”