One of the great things about the way I write historical fiction is the necessity of research travel. My current project took me first to London and Edinburgh to investigate written records [See blogs from July]. But a visit to the site of events in the story took me back to India, this time to the vibrant city of Kolkata [Calcutta] in the state of Bengal.

As very good luck would have it, I arrived as preparations were under way for this year’s Durga Puja, a festival honoring Goddess Durga. A fitting event from which to start my stories of this trip to India. In the featured image you see me gazing at one of the giant images of Goddess Durga’s lion being prepared for the festival. 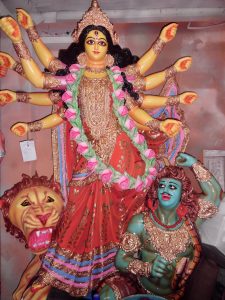 Before describing the festival, let me tell you about Goddess Durga and the victory of good over evil she represents.

In the picture you see Goddess Durga with her vehicle, a lion, on the left and her defeated enemy, Mahisa, on the right.

THIS IS THEIR STORY

Once upon a time, there was a creature called Mahisa [buffalo] who had the head of a buffalo and the body of a man. How he came to be is a story for another day.

Mahisa wanted the god Brahma to give him the gift of immortality. To catch Brahma’s attention, Mahisa performed severe austerities. Mahisa’s devotion pleased Brahma who offered him a favor. When Mahisa requested immortality, Brahma promised no man would be able to kill Mahisa, which Mahisa thought was what he requested because no woman could kill a man like himself.

Assured of long life and gifted with immense strength and magical abilities, Mahisa became the demons’ leader and challenged the gods, robbing them of their offerings and defeating them in battle. To say the gods were angry would be an understatement. The gods came together and pooled their anger. Fire came from Brahma’s face; a flame from Shiva’s body, and dazzling blue light emanated from Vishnu. Tongues of fire appeared from the other gods. The ensuing mass of fire and light merged to create Goddess Durga. The god Himalaya gave Durga a lion for her vehicle; Vishnu gave her a discus as a weapon, and Shiva bestowed Durga with his trident. I could tell you about all the gifts each god gave Durga, but it would make the blog too long. 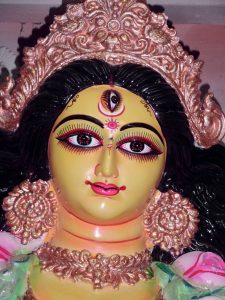 Suffice to say, Durga was extremely beautiful and each part of her body emanated energy from the gods.  When the gods told Durga the reason for her creation, the goddess laughed with such force that the earth trembled.

The earthquake’s roar terrified Mahisa and his demons. Mahisa sent men to find out the earthquake’s cause. They spied Durga in the forest wearing beautiful clothing and drinking wine from a golden cup. Awestruck, they immediately returned to Mahisa.

Excited by their descriptions of Durga’s beauty, Mahisa sent his prime minister with a marriage proposal. She refused Mahisa’s quest.

Mahisa sent a second messenger. Durga refused again. This time she became angry. Again the earth trembled. Durga was ready to fulfill the gods’ request. Mahisa sent his best soldiers to fight Durga. She defeated them. Mahisa decided to present himself to Durga. But instead of appearing as his true self, Mahisa transformed into a handsome man. Arriving at Durga’s hermitage, Mahisa told the goddess he was her true consort, saying: “I am the heroic buffalo, king of the demons, respected by gods; I hold this entire triple universe by the prowess of my own arms. I can assume any form I desire and can supply all sensual enjoyments. Choose me as your husband.”

Durga revealed her purpose was to kill him, and advised him either to flee to the netherworld or fight her. Mahisa continued his courtship. Durga repeated herself. Mahisa, believing himself immortal, chose battle. 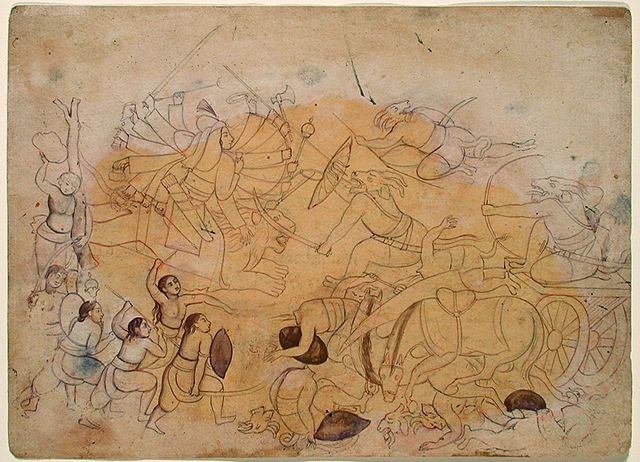 IT WAS A BATTLE OF EPIC PROPORTIONS

Mountains fell from the sky.

Durga’s forces emerged victorious. Mahisa resumed his buffalo form. He struck men with his muzzle; trampled them with his hooves; lashed soldiers with his tail and used his breath to throw Durga’s fighters to the earth.

She threw her noose over Mahisa to bind him.

Mahisa transformed into a lion. Durga cut off his head.

Mahisa became a man with a sword. Durga pierced him with her arrows.

Mahisa became an elephant and pulled Durga’s lion down with his trunk.

Durga cut off the elephant’s trunk.

Mahisa resumed his buffalo form and wounded Durga with his horns.

He used his tail to catch hold of the mountains and threw them at her.

Durga paused to fortify herself with a wine made from blood.

Her eyes became red and she laughed. “Roar and roar for a moment,” Durga said to her enemy, “while I drink this honeyed wine. The gods will soon roar when I slay you here.”

Durga leaped upon her enemy.

She kicked him in the neck with her foot

and spiked Mahisa with the trident given to her by Shiva.

When Durga struck Mahisa with her foot,

the demon began emerging from his own mouth.

Durga cut off his head and claimed her victory over evil.

Next Week: Now that we know the reason for Durga Puja, next week we’ll look at the festival itself.

While in Kolkata, I stayed at the historic Oberoi Grand, of which more later, but I would like to take this opportunity to express gratitude to chefs Harmeet and Mayukh who were so mindful of my need for gluten free food.

All photos property of Author.