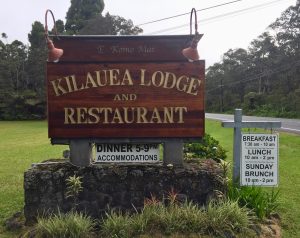 Sometimes you want to getaway without going anywhere. That’s a good time to explore areas close to home that people travel hundreds of miles to visit. Last week I decided to travel thirty miles to Volcano Village, and to look at it as if I’d never been there before. The weather was perfect and the traffic light. Before I knew it, I was at Kilauea Lodge, an iconic landmark located on Old Volcano Road.

Kilauea Lodge began its life as a YMCA camp called Hale O Aloha. Built in 1938, the camp served boys from all over the Territory of Hawaii who explored terrain at nearby Kīlauea Volcano and returned to sleep in dormitories after taking their meals and enjoying the fireplace at the lodge. 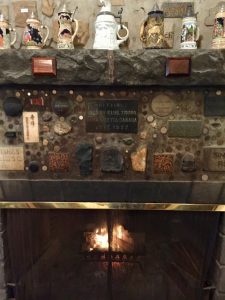 And not just any fireplace. Looking like the boys could enter at any moment, the Fireplace of Friendship continues to intrigue guests. Harold Lucas, YMCA camp director, came up with the idea of bringing together stones, coins and artifacts from around the world. 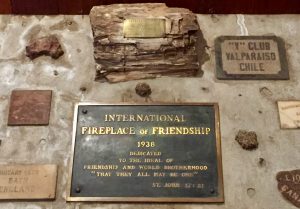 Within the fireplace are a poi pounder, dinosaur vertebrae, exotic minerals including an entire quartz embedded with gold. There’s a Mexican opal, over five hundred coins, and a substantial section of a petrified wood log at the top.

In October 1938 T. A. Jaggar, president of the local YMCA, and some young campers lit the first fire laid with driftwood from all the islands. Four hundred guests came for the momentous occasion.

The camp continued until the 1960 tsunami destroyed the Hilo YMCA structure. The organization sold the camp to finance a new facility, and Virginia and Bill Dicks opened the Volcano Lodge Restaurant as a lunch shop featuring “mile high pie.” With Volcano Road directly in front of the lodge, the restaurant did a good business until Māmalahoa Highway bypassed the older road. Business fell. The Dicks sold the property to Albert and Lorna Jeyte in 1986. 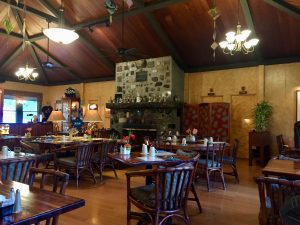 After extensive renovation, Kilauea Lodge opened in 1988, Dormitories became guest suites, and Albert learned to cook. The Jeytes made Kilauea Lodge a local landmark, and a popular place for visitors to Volcano National Park a mile up the highway to stay. 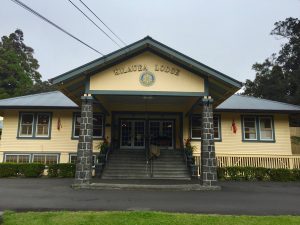 At some point in the near future, Kilauea Lodge will open a new chapter in it’s history. The property has been for sale since 2014 with an asking price of $5.2 million. 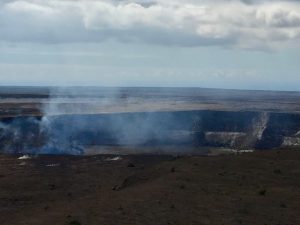 The next day, I was off to Volcanos National Park, a magical place that I imagine might be like middle earth. There’s rain forest and lava fields. Native birdsong and invasive Himalayan ginger to pull. 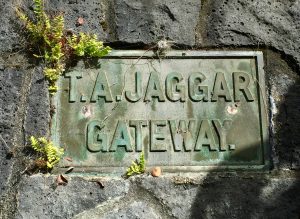 My first stop was the Thomas A. Jaggar Museum named after the founder of Hawaiian Volcano Observatory located at the same site.
The observatory began in 1912 as a joint effort of the Massachusetts Institute of Technology and the Hawaiian Volcano Research Association, a group of Honolulu businessmen who funded the project. Jaggar served as director until 1940.

The observatory moved to its current location on Uwekahuna Bluff next to the museum in 1986. The surrounding walkway looks directly over the Southwest Rift Zone. 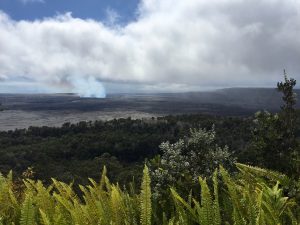 After drinking in the view, I drove back to the turn-off for Chain of Craters Road. The nineteen mile road winds from the mountain to the sea. In the first phase the drive wends through rainforest with birdsong in the air. As it climbs above the rainforest on a clear day, the sun gets hotter and the terrain more stark. As the road began its descent to the sea, I decided to return to Volcano for lunch at Cafe Ono. 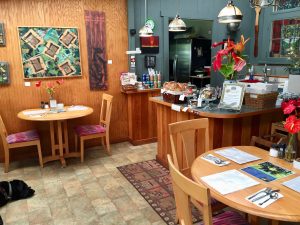 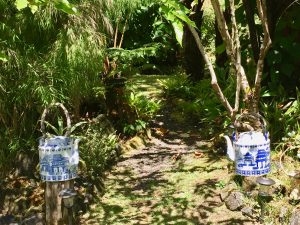 After lunch I went back to Kilauea Lodge for some reading and once again chuckled at the sign asking drivers to slow down to avoid the Senior Cat. 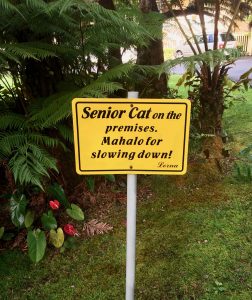 The next day I drove back to Hilo, refreshed and exhilarated from my visit up the mountain.