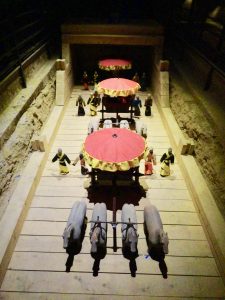 Before leaving Shaanxi Province for Shanghai, our tour group stopped at the Yangling Museum, also known as the Yang Mausoleum of Han. The occupants are Emperor Jing, the fourth emperor of the western Han, and his Empress Wang. The Han Dynasty followed Qin Shih Huang. 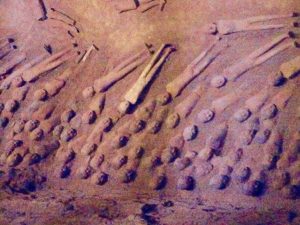 This museum is unusual, because in order to protect the artifacts the exhibits are underground and beneath a special type of glass imported from Czechoslovakia. Pottery figures, about one-tenth of actual life-size, depict court life, complete with warriors, palace maids, and livestock. After the majesty of Xi’an’s terra-cotta warriors, the figures resemble dolls.

If you want ancient history, go to Xi’an.

If you want commerce, go to Shanghai. 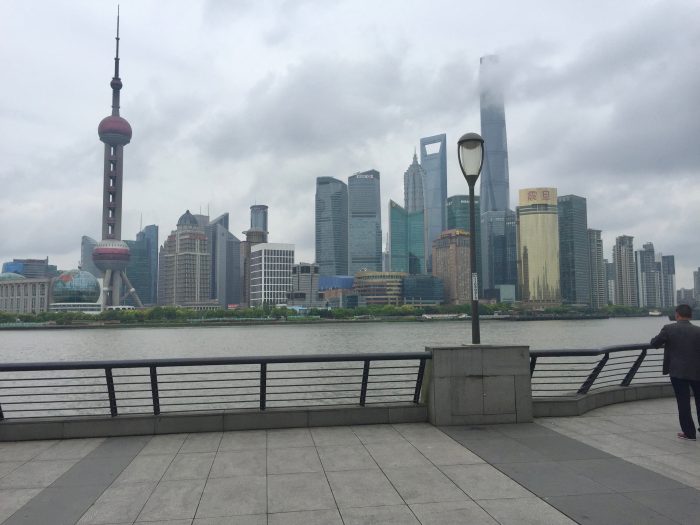 Shanghai greets the future with open arms. The city was one of five treaty ports opened after China’s defeat in the First Opium War, and quickly became a commercial center. In 1846 the British established an area called the Bund, a word they brought with them from India meaning an embankment or low track. After reinforcing the riversides and paving a street, the British built rows of commercial buildings. 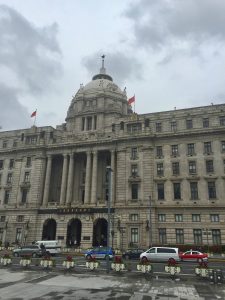 One of the best known of these is the original headquarters of HSBC – the Hongkong and Shanghai Bank. Built in 1923, it was the largest bank building in the Far East of that time. And its global size was second only to the Bank of Scotland. 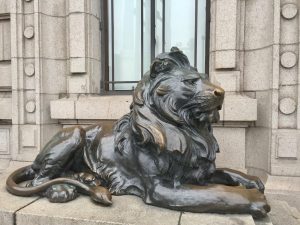 Two bronze lions flank the entry doors. One lion roars to symbolize protection; the other sits calmly as a sign of security.

Today the original lions are in the Shanghai Museum. The Shanghai Pudong Development Bank which currently occupies the building replaced them with replicas in 1997. One story says the original bronze lions had to be moved to protect them from the many people who rubbed their noses for luck – and the current lions do sport shiny noses. 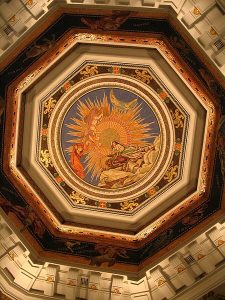 Inside the bank are eight striking mosaic murals. No pictures allowed, which is a great shame, because the frescos are incredible. The ceiling dome has frescos with the twelve zodiac signs, the sun, and the moon. Below are eight murals depiciting HSBC’s branches at the time: Shanghai, Hong Kong, Tokyo, London, New York City, Bangkok, Paris, and Calcutta. Each fresco had a image symbolizing the city. This photo is in the public domain.

During the Cultural Revolution, the murals were covered to protect them from destruction. People forgot about them until the Shanghai Pudong Development Bank conducted renovations in 1997. 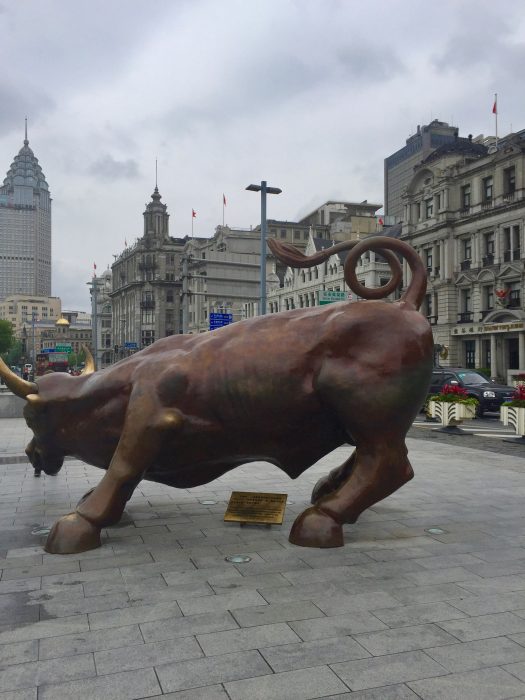 Back outside, the Bund Bull, unveiled in 2010 faces the river to bring good fortune and wealth to the city. 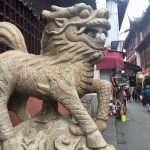 Shanghai’s traditional urban core is called Old Town, or more colloquially, China Town. After the foreign concession districts were built, this area continued to be the Chinese administrative center. 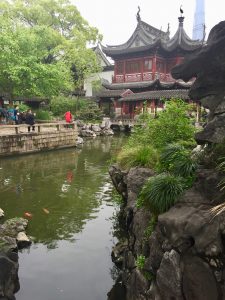 One of the more famous sights within Old Town is the Yu Garden, completed in 1557 by Pan Yundan to honor his parents. Today this Garden of Happiness is in the middle of the Yuyan Tourist Mart, a bustling shopping area.

A well-known restaurant is Lu Bo Lang, known for its dumplings and one of the few restaurants still owned by the government.

From the back of Lu Bo Lang’s business card:
Smelling the Fragrance I stop
At the Famous Restaurant
And all tacsted [sic] by the flavor I park my car
At the Lu Bo Lang 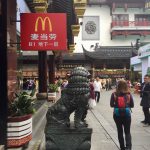 I truly enjoyed Chinese food. To my delight, we tasted regional and ethnic specialties. Others in the group became tired of Chinese food, and I understand this often happens. Lucky for them, you can find those famous Golden Arches and even Starbucks.

Roof of HSBC in the public domain. Wikimedia Commons.