Today is Halloween – a day of Spooktacular parties, costumes, ghost stories, and watching scary movies. And let us not forget the annual showings of Rocky Horror Picture Show. Halloween is a day when, potentially, nothing is as it seems to be.

For instance, who would have thought a young woman in pre-Victorian England would invent the fiction genres of science fiction and horror in her short novel titled Frankenstein. Critics argue she consciously used the novel to look at the dangers of what in 1818 seemed an increasingly technological world. Whatever would she have thought of our world today? 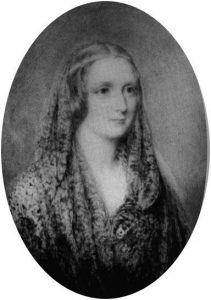 Mary Shelley was the daughter of two unconventional intellectuals: Mary Wollstonecraft, author of Vindication of the Rights of Women, and William Godwin. Wollstonecraft died shortly after Mary’s birth, leaving her to the ministrations of a stepmother she didn’t care for.

Fast forward to 1814. Mary, age 15, ran away with Percy Bysshe Shelley, age 20. He, inconveniently, already had a wife. In 1815 Mary gave birth to a daughter who died. In 1816 Shelley’s wife committed suicide, allowing the couple to marry. And they were Lord Byron’s houseguests at Lake Geneva. One dark rainy day Byron and his guests read ghost stories, and someone suggested each guest (There were others.) write a ghost story. Frankenstein is Mary’s ghost story. She was then 17 years old.

THE MONSTER IS BORN 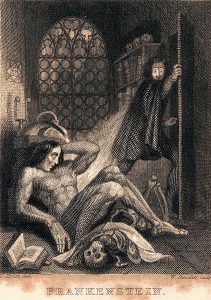 Mary tells the story of Victor Frankenstein, a brilliant student who wants to bring a dead body to life. He uses his knowledge of chemistry, alchemy, and electricity to assemble an entity referred to as a Monster.

– Victor and his adopted step-sister Elizabeth plan to marry.
– The Monster is lonely. Victor promises to make him a companion & then renegs.
– The Monster strangles Victor’s bride.
– Victor and the Monster wind up in the Arctic Circle where both die.

Frankenstein movies are as old as the movies. Some are meant to frighten the viewer. Some are slapstick. I’ve picked clips from six of these movies.

Thomas Edison produced the first film adaptation in 1910. The silent movie is lest than 14 minutes long.

The first talking Frankenstein movie came out in 1931 starring Boris Karloff as the Monster. Once a monster, always a monster. Karloff, originally an English actor named William Pratt, appeared in three Frankenstein movies. In one of his last performances he voiced the Grinch in How the Grinch Stole Christmas (1966).

Karloff reprised his role in Bride of Frankenstein (1934) with Elsa Lancaster as the bride. She didn’t have many lines, but she screamed a lot.

MONSTERS CAN BE FUNNY

By 1948 audiences were ready to laugh at things that frightened them. Abbot & Costello Meet Frankenstein brought three villains together: Frankenstein’s Monster, Dracula, and Wolf Man. In the colorized trailer below, Bela Lugosi reprises his role as Count Dracula.

HOW DO YOU PRONOUNCE IGOR?

In a way, Mel Brooks picked up where Abbot & Costello left off. In Young Frankenstein (1974) Gene Wilder plays the grandson of the original doctor. Here, Wilder returns to Transylvania — Dracula’s homeland —  and traverses through a forest where werewolves are sighted. Where, wolves?

PERHAPS IT WAS JUST A MISUNDERSTANDING

Here Victor Frankenstein realizes he has created a life form, and wonders whether that was a good idea.

Branagh’s film may be the closest to Shelley’s original intent. Mary Shelley’s Frankenstein takes its audience into an experience as intense as that of viewing Edison’s 1910 movie or reading Mary Shelley’s novel less than twenty years after the steam train was invented.

Halloween is about tricksters and illusion, and Mary Shelley created one of the most famous ghouls of all time. Trick or Treat?