According to Feng Shui principles, January is “get organized month.” I guess it’s all those pristine new calendars – the ones we still buy even though our entire life is held captive by smart phones. When I think of getting organized, clearing my desk comes to mind. Simply shoving paper into drawers doesn’t count, by the way. I also go through the paper and have been having quite a lot of fun shredding. Did you know modern shredders can reduce paper to the size of a dust mite? Very cathartic.

Why bother? I’m glad you asked.

Nothing new, including positive energy, can flow into your life until you make room for it.

And clutter takes up a lot of room. 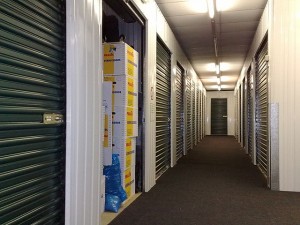 Did you know that the United States makes up almost 90 percent of the global market for self-storage units? In 2013 there were 48,000 self-storage facilities covering 2.3 billion square feet. That’s a lot of storage space.

For many people, self-storage units make life in the home less cluttered. Living in a small space may not allow storage for off-season sports equipment such as skis in summer. People move and/or downsize and can’t quite let go of excess items because, well, an extra trampoline might come in handy some day. Or not. 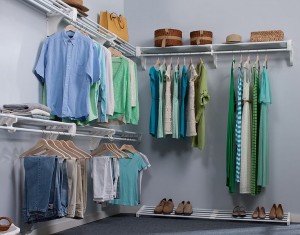 Many of us fantasize about the perfectly organized closet – the one where we can actually find something. According to the Freedonia Group, the demand for home organization products in the U.S. could grow 3.5 percent annually through 2019.

Disclosure: For the past several weeks I’ve been looking for the perfect way to organize my oddly shaped closet (part reach-in, part walk-in). I think the reason I’ve been looking so intently is procrastination, which is one of the primary reasons we retain clutter.

Other reasons we keep clutter include guilt, because we feel obligated to keep gifts or legacies. Then there’s the fear something may actually be valuable. I’m told this tends to kick in after watching an episode of Antiques Roadshow. My father suffered from the “it might come in handy someday” syndrome. No, it didn’t.

Some people organize their clutter by getting rid of their possessions entirely. Joshua Fields Millburn and Ryan Nicodemus walked away from their highly paid jobs and life of stuff, because it wasn’t working for them. In 2009 the young men moved to a cabin in Montana and began calling themselves The Minimalists. They struck a chord among Americans. In 2014 their website had more than 2 million hits, although I’m not sure that translates into converts to the simple life.

What do you get without excess possessions? Joshua and Ryan suggests the most important things are not material. Health, relationships, passion for life, and experiences don’t take up space.

Sounds a bit stark to me. Nevertheless, I’ll do my best to create room for new experiences. I’ve got a book to research after all.

Shameless Self-Promotion: To my delight, Rama’s Labyrinth received a 5-star review in the San Francisco Book Review. Check it out.

Kendra Bozarth. “The Growth of Self-Storage.”

2 thoughts on “For Positive Energy: Get Rid of Clutter!”