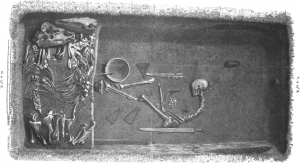 It is impossible for anyone to look at anything with a completely unbiased eye. No matter how much we try to adjust for personal and cultural bias, none of us can completely escape what we think of as obvious.

In 1871 Hjalmar Stolpe, a trained entomologist, went to the Swedish town of Birka looking for prehistoric flies trapped in amber. Shortly after his arrival, he realized

Birka was a major site of Viking tombs.

In response he became an archeologist and excavated more than 1,100 graves outside the town walls. In 1889 Stolpe excavated tomb Bj 581 which was located on an elevated terrace near what would have been a military garrison.

In addition to skeletal remains, Stolpe found a sword, battle axe, armor piercing arrows, a spear, two shields, the remains of two sacrificed horses, and in the lap of the deceased, a game called hnefatafl, or King’s Table. Clearly, the tomb’s occupant was a high-ranking warrior. And, naturally, such a warrior must be male.

There were stories of female warriors. A tenth century Irish text called Inghen Ruaidh, or Red Girl, says a female warrior led the Viking fleet to Ireland. The thirteenth century saga of Volsungs (Shield Maidens) tells of women fighting with men. Stolpe and subsequent archeologists recognized these tales for the stories they thought they were. Warriors, by definition, were male.

In 2014 Anna Kjellström examined the pelvic bones and mandible from the remains in Bj 581. Her study suggested the bones were female. Detractors suggested the data was inaccurate, that the bones may have been mislabeled or mixed with other bones. Little notice was taken.

In news announced last Friday, Charlotte Hedenstierna-Jonson went to these same bones to extract two types of DNA. Mitochondrial DNA which is passed from mother to child, would indicate if the bones were from one or several people. Nuclear DNA would show the biological sex. The mitochondrial DNA matched. The nuclear DNA had female chromosomes.

The remains are female. Unless they aren’t.

Judith Jesch points out recent researchers are too determined to show women were Viking warriors and overlook other explanations for why a female body would be in a warrior’s tomb. Bones from various people might have been mixed together since the original excavation. The emphasis on grave goods is too speculative.

There’s less controversy on other aspects of the skeleton’s original owner. The teeth indicate a person at least thirty years old, and about five feet, six inches tall.

One argument against the new assumption that Bj 581 is a woman’s grave is that we don’t know who buried her why. We know how the remains appear at death, but not how they were in life.

Either way, the DNA discovery is the latest chapter in a major rethinking of the Viking age. When Stolpe found a warrior’s grave, he couldn’t conceive it could be anything but male. Modern tests prove the remains are female. I don’t think it’s a stretch to think they might have belonged to a warrior.