My recent visit to the Honolulu Museum of Art was prompted by two exhibits on women artists in Territorial Hawai`i. One exhibit focused on Women Artists in Hawai`i: 1900-1950, which encompasses most of the Territorial period. Both residents and visitors to the islands, these women had much to contribute to Honolulu’s (to me) surprisingly vibrant art scene. But it was the companion exhibit that caught my attention.

Days of Grace: California Artist Grace Hudson in Hawai’i introduced me to an artist who achieved commercial success with her portraits of native peoples in California and Hawai`i. Grace’s interest in art and ethnography came naturally. Her parents were deeply interested in the Pomo Indians near their home in Uziah, California. They were also talented photographers. 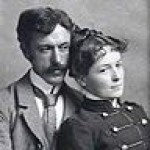 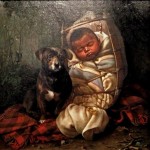 By 1895 Grace had become so successful, John was able to give up medicine to develop his own interests in archeology and ethnography. Unfortunately the stress of producing enough saleable art began to affect Grace’s mental and physical health. She was exhausted, anxious, and unable to sleep soundly. On the advice of friends, Grace and John concluded she would be able to recover in Honolulu. She would travel alone.

Grace arrived in Honolulu on January 2, 1901 and took up residence at the Royal Hawaiian Hotel on the corner of Hotel and Richards Streets. With letters of introduction and the connections she had made aboard the Zealandia out of San Francisco, Grace quickly became part of Honolulu’s social and art scene. 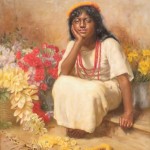 Grace called this portrait Emma Square after the park near her hotel. It was a popular place for lei sellers. Grace wrote that one of the lei sellers had taken a fancy to her, but whether she was the subject of Grace’s portrait remains unknown.

In June Grace traveled to Hilo aboard the Kinau, a vessel she referred to as an “evil smelling craft.” Initially Grace stayed at the Hilo Hotel. She briefly relocated to Volcano House and then returned to Hilo where she began painting. 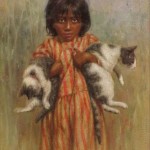 One of the pictures begun in Hilo was Punahele which was shown at Grace’s October art exhibition at the Pacific Hardware Company in Honolulu. The portrait was well-received and later shown at the 1909 Alaska-Yukon-Pacific Exposition in Seattle.

In 1901 Hilo was a pretty quiet town, and though Grace found plenty of subjects for painting, she missed the social life in Honlulu. She returned to the Royal Hawaiian Hotel in August, later moving to the hotel’s annex in Waikīkī which featured cottages with seaside amenities. In Waikīkī Grace encountered the model for Aloha. 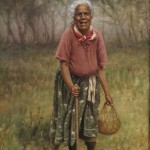 Grace didn’t assign a title to this portrait in her painting diary, but the custom made frame is embossed with the name ‘Aloha.’ Grace gave the portrait to her husband. There were only three paintings that remained in the Hudson household until their deaths. Aloha was one of them.

Grace arrived back in San Francisco on November 16, 1901. She was rested, had a new enthusiasm for her art, and was apparently happy to return to her husband.

3 thoughts on “Days of Grace”