Winston Churchill is known for many things. He smoked a cigar. He spoke in what I think of as a Shakespearean voice. He led Britain in World War II. And he never was seen outside without a hat. He seems to me to be a fitting image for Felt Hat Day which you may choose to celebrate this Thursday. 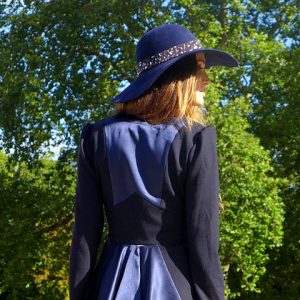 Hats are no longer a required part of outdoor clothing. Actually, very little is required for outside attire these days. But once hats and, for ladies, gloves were expected. Now ladies wear hats at weddings and on Ascot Day, if they happened to be invited. Though ladies picture hats are fast being replaced by smaller, whimsical Fascinators.

Nevertheless up until 1960, hats were required men’s wear. Hence the famous 1934 advertising slogan: “If you want to get ahead, get a hat.”**

There were Bowler Hats like the one Churchill is wearing in the picture above. And Homberg Hats. And even Tyrollean hats which are still in use today, usually in Oktoberfest celebrations. 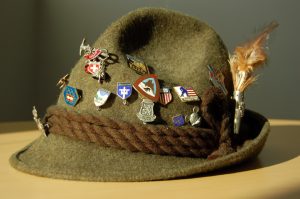 But fashion changed in 1961 when President John F. Kennedy took the inaugural oath without wearing a hat. Quite a shock at the time. Needless to say, hat sales plummeted. 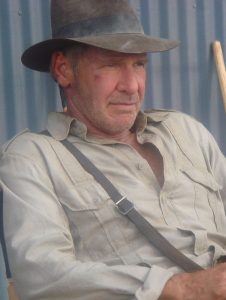 There was a slight uptick when Harrison Ford wore his famous fedora in Raiders of the Lost Ark. But the only hat with staying power has been the Cowboy hat. 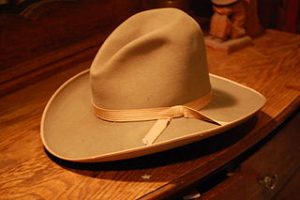 Hats had a purpose. Felt hats were worn in winter for warmth, and straw hats in summer for coolness and to shade the eyes. Cowboys seem to have continued this tradition.

Since this is a blog about Felt Hat Day, it seems logical to talk about felt hats.

Felt can be made of wool or fur. Wool consistently came from sheep. You probably knew that. The fur was of two types. There was rabbit fur felt, made from the undercoat of a special breed of rabbit. And the best quality felt hat was made from beaver fur. This was hugely popular in the eighteenth and nineteenth centuries and led directly to the international fur trade – you will be relived to know that I won’t be writing about that today.

St. Clement is considered the Patron Saint of Felt Hat Makers, because while on a pilgrimage he lined his sandals with wool, and the friction of his feet against the wool created an early form of felt. I’m not saying this was the preferred method of producing felt, but it makes an interesting anecdote.

Why was the Mad Hatter “mad”? 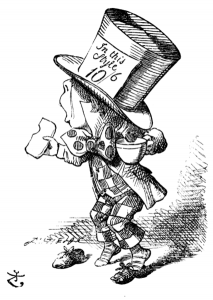 Turning felt into a hat in the nineteenth century was a long process. It involved pulling loose felt fibers into a cone and immersing the cone in very hot water to shrink the felt in to a better fiber. The hat was then steamed and compressed over wooden hat blocks to the desired shape. In the eighteenth and nineteenth centuries, hatters treated the fur with mercury nitrate which exposed them to trace elements of mercury on a daily basis. Over time they exhibited signs of mental decline, including slurred speech, memory loss, tremors, and what we might call dementia. Hatters also generally suffered from overwork, low pay, and malnutrition. It was not the best career choice. Mercury is no longer used to create felt.

The Mad Hatter depicted here is from Lewis Carroll’s Alice in Wonderland, drawn by John Tenniel. The 10/6 refers to the price of a hat in the style he was wearing: 10 shillings, 6 pence.

** It is said that the slogan “If You Want To Get Ahead, Get a Hat” was coined by Charles Sydney Catlin to demonstrate his ability to make good advertising copy. Caitlin went to a job interview where he produced the slogan. He didn’t get the job. Sadly, not long after he saw his words on an advertisement posted on the London Underground. A hard lesson learned.