As anyone in my family will tell you, I’m not much of a shopper. There are several reasons for this, starting with the fact I don’t like traffic or trolling for a parking space.

But despite the daunting prospect of full parking lots and possible inclement weather, I do appreciate beautiful things, which is why I enjoy craft fairs at the annual Merrie Monarch Festival.

The world famous hula competition encompasses many aspects of Hawaiian culture – among them language, history, and artistry.

The Merrie Monarch Invitational Hawaiian Arts Fair is sponsored by the Merrie Monarch Festival. Organizer  Nelson Makua calls it a celebration of all things Hawaiian. Makua selects one hundred sixty vendors from the State of Hawai`i. Many return each year to reconnect with other artists.

Vendors develop their products all year. For example, it takes twenty to eighty hours to hand wrap a feather lei. Each 24-inch lei, on average, uses from two to three thousand feathers. Traditional colors are gold, green, red and black.

Everything at the Invitational Hawaiian Arts Fair was exquisitely created and beautifully displayed. Among the items that caught my eye were pahu drums, shell leis and textiles.

The Hawaii Arts, Crafts and Food Festival is a more eclectic event. Organizers hold two events annually, one to coincide with the Merrie Monarch Festival and the other during the Christmas shopping season. The emphasis is on Hawai`i’s diverse cultural heritage.

Several vendors specialized in handmade jewelry. There were T-shirts and other clothing items, products made from koa wood, specialty soaps and fragrances. 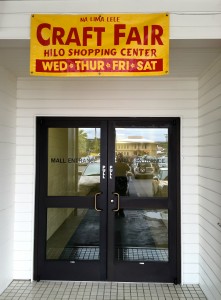 My last stop was at Hilo Shopping Center for the Merrie Monarch Craft Fair. Marcia Prose, fair coordinator, said, “we like to call our fair ‘kama`aina craft fair’ because these are truly local people.”

There were about thirty vendors selling jewelry, clothing, pictures ready for framing, and much more.

The Merrie Monarch Festival is a special event for everyone in the Hilo community. It’s an opportunity to connect with the creative energies of dance, music, and design. The 52nd Merrie Monarch is now a memory, but it’s not to early to begin planning your visit next year.

2 thoughts on “CRAFT FAIRS AT THE MERRIE MONARCH FESTIVAL”