Much as I could have happily spent all my time in Edinburgh eating, drinking, and sightseeing – I was there for a purpose. Not that the first three options aren’t a worthy full-time occupation. Nevertheless, I came to Edinburgh to do research at the Scottish National Library which is the repository for the Church of Scotland Archives.

Every day I walked 20 minutes each way from 34 Bread Street along West Port to GrassMarket and up a steep incline to George IV Bridge. The streets went through Old Town past where the town wall once stood. So, let’s stroll on my morning commute. 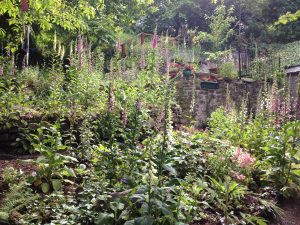 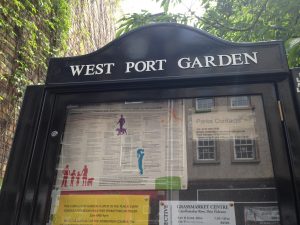 West Port Garden is a charming oasis created by Norah Geddes in 1910 to provide green space for children living in Old Town’s slums. There were other similar gardens at the time, but few remain. The garden opened every afternoon from May to September under supervision of a Lady Helper. Activities included swings, a sandpit, and an area for ‘football.’ 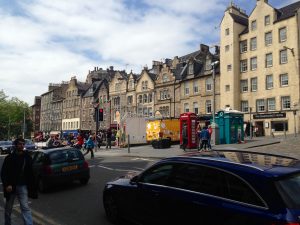 GrassMarket is almost deserted in the morning and bustling in the afternoon. In times past, the All Hallows Horse Fair gave the market its purpose. Stables and yards were built behind the area’s houses where cattle could be fattened before being auctioned at the market. 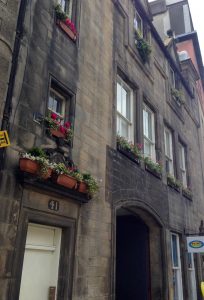 The area was also a frequent site of public hangings, beginning about 1660. Over 100 Covenanters (opponents to English rule) gave up their lives between 1661 and 1688 in what was known as the Killing Time.

There is the tale of Margaret Dickson who was hanged at GrassMarket in 1724 for murdering her illegitimate babe. Pronounced dead, she was put into a cart where she awoke. She could not be executed a second time. Later the words “until dead” were added to execution orders. Today Maggie Dickson’s Pub graces GrassMarket. 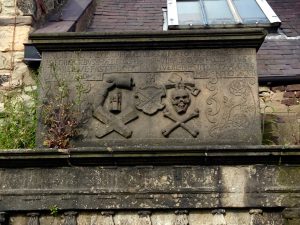 Continuing uphill, the entry to Greyfriars Kirkyard appears. The cemetery dates back to the 1560s. During the nineteenth century the University of Edinburgh had a prestigious medical program which inadvertently sparked an underground trade in corpses. These were acquired by bodysnatchers who sold them to medical students. Families countered the crime by boxing graves in metal grates called mortsafes. For this and other reasons, Greyfriars Kirkyard is thought to be haunted.

The most famous grave in Greyfriars Kirkyard belongs to a Skye Terrier called Bobby. In 1850 John Gray moved to Edinburgh with his family and joined the police force as a night watchman. Gray took Bobby with him on his rounds. Eight years later, Gray died from tuberculosis and took his place in the cemetery. Bobby refused to leave his master’s resting place. 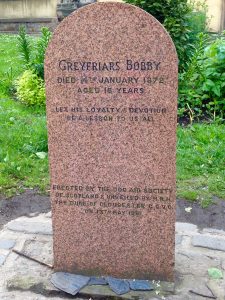 Finally, the gardener built Bobby a shelter by the grave. The little dog became famous throughout Edinburgh. Every day crowds gathered at the cemetery entrance waiting for the 1:00 gun salute. At this time, Bobby left the gravesite to go for his meal at the same Coffee House he’d visited when his master lived. 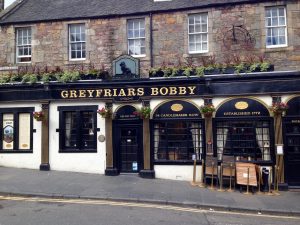 At the corner where GrassMarket turns onto George IV Bridge, there is an attractive pub named for Greyfriars Bobby.

And at the opposite corner, there is a granite fountain with a statute of Greyfriars Bobby on top. In the afternoons it’s hard to get around the tourists taking pictures standing next to the immortal pup. 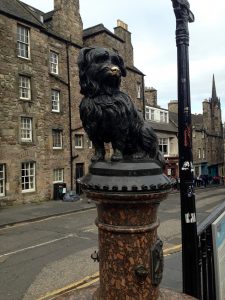 A Tribute to the affectionate fidelity of Greyfriars Bobby. In1858 this faithful dog followed the remains of his master to Greyfriars Churchyard and lingered near the spot until his death in 1872.

George IV Bridge is a 300 meter elevated street built on a multi-arched bridge completed in 1832 to allow greater access between the Old and New Towns. 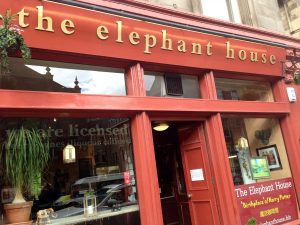 A few blocks beyond Greyfriars Bobby’s monument is Elephant House, a purveyor of gourmet tea and coffee that opened in 1995. Though its beverages and pastries are excellent, Elephant House is most known as a place where authors write well-known books. Among them: Ian Rankin who writes the Rebus novels, Alexander McCall-Smith known for the No.1 Ladies’ Detective Agency, and the most famous of them all, J. K. Rowling who wrote several books about wizards.

Naturally I tried to absorb some of the authors’ magic “ink”. Whether I succeeded or not will become known as “Malice” develops beyond the research stage. 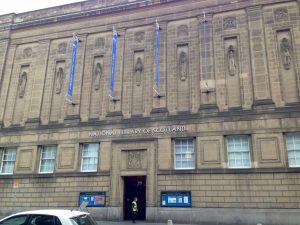 Also on George IV Bridge are two notable buildings. The first is the National Museum of Scotland, and then there’s the building where I spent most of my time, the National Library of Scotland. More on these next week.

Nicola Strochlic. “Welcome to the Most Haunted Graveyard in the World.” Daily Beast. Oct 30. 2013