With St. Patrick’s Day coming up on Saturday, it’s time to think about how to catch leprechauns, the wee people associated with Ireland and gold.

Leprechauns aren’t easy to find. Rumor has it these small fairies were once about two feet tall, but they’ve become smaller over time until now they can fit in a shoebox.

Leprechauns are tricksters with a less than pleasing personality. The words lustful, nasty, and capricious are found in any description, but then so might you be if people only want to catch you to steal your gold.

According to leprechaun mythology, the wee people have access to the pot of gold left behind after the Viking invasions. The gold is at the end of the rainbow — though which rainbow and where it ends is elusive.

If someone catches a leprechaun or steals his ring, he will barter for the ring’s return and his release. The captor wants the gold. The leprechaun offers three wishes or a gold coin. The transaction, however, can be challenging, because leprechauns easily trick their less clever opponents.

There’s the story of a man who captured a leprechaun and forced the magical creature to reveal the bush where he could dig for the treasure. The leprechaun took his captor to the site, knowing the man didn’t have a shovel. The man released the leprechaun, marked the bush with one of his red garters, returned home for a shovel, and went back to the site, only to find every tree and bush had a red garter. No treasure for him.

Seamus of County Mayo also caught a leprechaun and in exchange for three wishes, released the trickster. Seamus wished to be the richest man on a tropical island. Poof! There he stood on his tropical island. An island with neither people nor pubs. After a few hours Seamus became bored, and wished to return to Ireland. Like the man with too many red garters, he ended up where he started out. 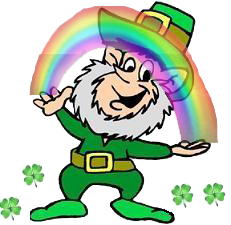 If you think you can do better, you can make a leprechaun trap. Most often these are small containers, about the size of a shoe box.  Cut a hole in the top at the top of the box, and cover it with a piece of felt. This is the trap door. To make the leprechaun feel at home, you might want to paint the box green and cover it with shamrocks.

Leprechauns are said to like gold and shiny objects, so you could bait the trap with gold jewelry or chocolate coins covered in gold foil. Leprechauns also like whisky and dandelion tea, but be careful. Leprechauns who drink too much whiskey can be mean spirited. Place whatever you select as bait on top of the felt. Now it’s time to spring the trap by putting it in a secluded part of the yard the night before St. Patrick’s Day when leprechauns are most active.

If you catch a leprechaun, please leave a comment so the rest of us can set a trap next year. And be careful or you’ll end up like Seamus.

Whether you catch a leprechaun or not, have a

How to catch a leprechaun.

How to Catch a Leprechaun. Your Irish Culture.

“Legend of the Irish Leprechaun.” YourIrish.com

Alicia McDermott. “Leprechauns: At the End of the Rainbow.” Ancient Origins. Sept. 21, 2015