My unpretentious papier mache mask is a little worse for wear, but to me this kitty face represents Carnival in Venice, a season celebrated from the day after Christmas until the day before Lent. Venetian masks are famous, and it’s said that mask shops are more numerous in Venice that greengrocers or butchers. This makes sense when you consider the importance of tourism to this city fighting to stay afloat, and Carnival season draws many visitors.

The word Carnival comes from the Latin words Carnem (meat) and Vale (farewell). The Christian Season of Lent begins the day after Carnival ends. At one time, Christians weren’t allowed to eat meat or any sumptuous foods for the forty days of Lent. Another term for the day before Lent is Shrove Tuesday also known as Fat Tuesday. Pancakes, fried breads and/or pastries with their appealing ingredients of eggs, sugar, and fat could not be eaten during Lent.

Traditionally, Christians confessed their sins when Lent started, and many wanted noteworthy sins to confess. Over time the carnival season became associated with debauchery, dancing, sporting competitions, parades, and all manner of unacceptable social behavior. No wonder people wore masks. 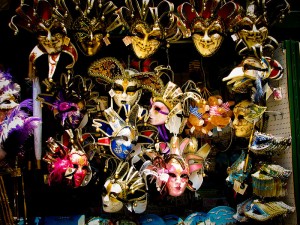 Venetian masks are most prevalent during Carnival season. But once they were worn any time someone wanted to evade the strict Venetian social system. Masks could cover the entire face or merely the eyes. There were restrictions. A person couldn’t wear both a mask and weapons. In the eighteenth century it became illegal to wear a mask while gambling. It was also forbidden to wear a mask when visiting a convent.

The King of Austria banned Carnival and masks in 1797. The government revived the festival in 1979 to draw visitors to Venice. Estimates are that three million visitors come to Venice annually just for the Carnival Season. It’s more fun if you wear a costume 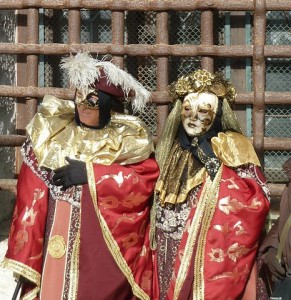 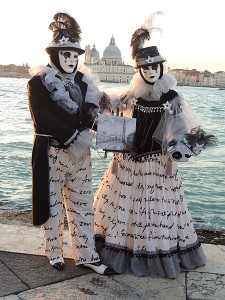 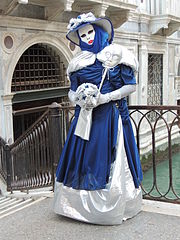 And New Orleans is the American capital for Mardi Gras.

The first parade took place in 1837, but it was after the American Civil War that Mardi Gras became the cultural phenomenon it is today. In 1872 New Orleans was looking for a way to bring visitors to the city. The city’s effort coincided with the arrival of the Russian Grand Duke Alexei Alexandrovich. The Krewe of Rex, one of several clubs that put on Mardi Gras events, is credited with establishing the official colors of purple, green, and gold as well as the official song If I Ever Cease to Love, taken from a popular musical called Bluebeard. Legend has it the club picked the song because Duke Alexis liked the actress who sang it.

You can enjoy the song and memories from Mardi Gras of the past.

May we all turn into cats and dogs,

If ever I cease to love.”

In other words, Let the Good Times Roll.

History of the Venetian Mask.