As you may recall from a previous blog about Kolkata, I went to that historic city in search of clues about Mary Pigot, the protagonist in my current project. Calcutta was the capital of the British Raj until December 1911 when British administrators removed to New Delhi, and buildings in Calcutta’s historic district remain much as they were. 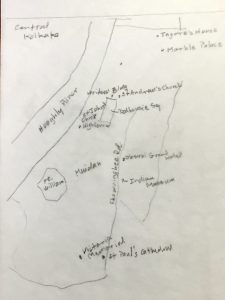 Looking at my poorly drawn map where nothing is to scale, you can see the Hooghly River in the west with early Calcutta on its eastern banks. Fort William, the oldest structure, is surrounded by the Maidan, an open area. To the north is Dalhousie Square where we find three buildings Mary Pigot probably knew. Further north (not shown) are Bethune College and the Scottish College, both institutions Mary knew well. 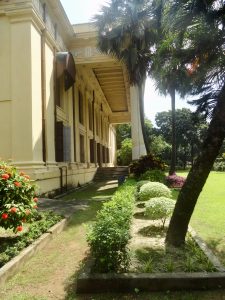 ST. JOHN’S CHURCH, completed in 1787, was the second Church of England building in Calcutta. The first was within Ft. William’s walls. Maharaja Nabo Kotten Bahadur donated the land and Warren Hastings, Governor General of the British East India Company, laid the foundation stone in 1784. Architects adapted the design from St.-Martin-in-the-Fields (London), but added colonnaded side verandas to reduce glare from the sun. 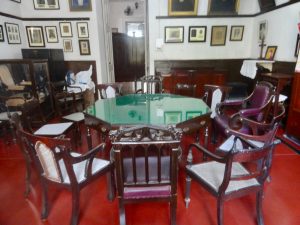 At that time, matters of government were so minimal that William Hastings conducted affairs at this octagonal green table. The governor’s chair is still there. 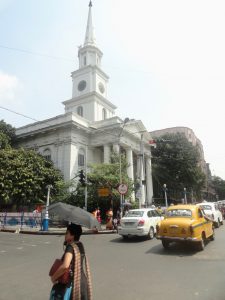 ST. ANDREW’S KIRK, the official Scottish church, is on a different side of the square. It too was modeled after St.-Martin-in-the-Fields — and looks considerably more like the original structure. Scottish expatriates were a large part of Calcutta’s population, initially recruited by the East India Company. Their occupations included soldiers, merchants, agriculturalists supplying jute and indigo commodities, and missionaries from both the Church of Scotland and the Scottish Free Church. Mary Pigot’s employer was the Church of Scotland. 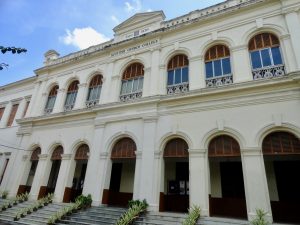 The Church of Scotland also sponsored what was then called the General Assembly’s Institution – after the church’s governing body. Mary’s nemesis, Rev. William Hastie, arrived to take charge of the college in 1878. In 1929 the name changed to SCOTTISH CHURCH COLLEGE. The institution is located on Hedua Square, previously known as Cornwallis Square. 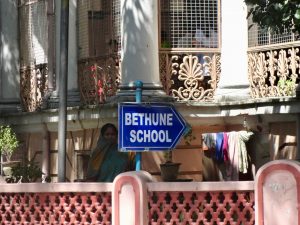 BETHUNE COLLEGE is located on the same square. Mary Pigot taught here before taking up her position at the Scottish Orphanage for Girls. When we entered the gate, my guide had a word with the guards who said we could take exterior pictures. Just as I took a couple pictures one of the teachers rushed out. The guide and I ended up in the head teacher’s office. I could only guess at the conversation that ensued – firm words, gestures, smiles, shrugs. In the end, we thanked them and left. Who says researchers don’t have interesting experiences? 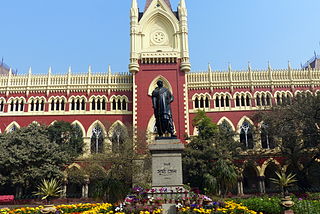 The key incidents in my project took place here in the Calcutta HIGH COURT. This building, constructed in 1872, was modeled after the 13th century Cloth Hall at Ypres, Belgium. The cloth hall was destroyed during World War I. Ironically, architects from Belgium came to Calcutta to copy the copy in order to reconstruct the building in Ypres. That reconstructed building is now a UNESCO World Heritage Site.

The High Court is closed to visitors, but my guide Anup Saha spoke to the appropriate officials and gained permission for us to go inside. Like many structures, the building surrounds a courtyard. Offices and courtrooms surround the central space with open verandas for access.

What might Mary have thought as she entered the oldest court in India?

She walked up to this massive building with its red brick exterior, passed under the vaulted cloisters, climbed the stairs, and entered a small courtroom for the most dramatic experience of her life.

Other photos and drawings by Author.