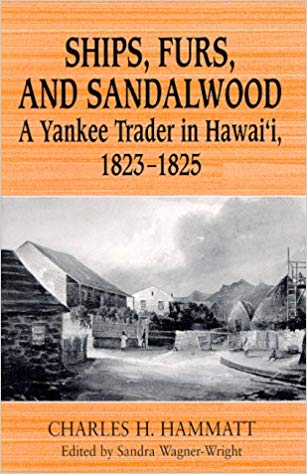 Charles H. Hammatt arrived in Honolulu in 1823 anxious to do business, not to save souls. Young, confident, and ambitious, Hammatt had been entrusted by a mercantile firm in Boston with the delicate task of negotiating trade agreements with Hawaiian royalty to secure sandalwood for the China Trade.

“We have no fears of your falling into any of the vices you will find at the Islands,” his employers wrote in their detailed instructions, “but it may be well to reflect on them, to be better prepared to reside in a Society where indolence, intemperance, debauchery, and gambling are so fashionable.”

Hammatt remained in Hawai’i long enough to form his own opinions about native society and the odd mix of miscreants and missionaries that populated the largest port in the Pacific. His personal and business dealings brought him into close contact with a wide range of people, from the king, Liholiho (Kamehameha II), and his wary ministers to unscrupulous harbor merchants and sea captains and other “Yankee rogues.” From time to time Hammatt also found himself among polite missionary society. He diligently recorded his encounters and observations in his journal, which, published here for the first time, provides an unexpected and intimate glimpse of life in frontier Hawai’i less than half a century after Cook’s arrival.

Ultimately, Hammatt proved unsuccessful in his business dealings, and in 1825 his employers ordered him home to Boston. But the account he left of his failed mission is an exciting and colorful addition to previous descriptions from the period. Hammatt learned the hard way that the Hawaiians were shrewd negotiators and in firm control of all aspects of trade with foreigners. Readers will delight in this unique view of a Yankee trader and his merchant rivals competing to do business with Hawaiian royalty.