Spoiler Alert – Don’t read this blog if you dislike Christmas decorations before Thanksgiving.

Today’s image shows what happens when holiday decorations crash into each other. This phenomenon often occurs at craft and card stores, where we’re sure to find Valentine’s decorations and cards on January 2. But such confusion is seldom on public display at my house.

Allow me to introduce my decorative characters in order of their appearance. First we have the Official Stuffed Black Halloween Cat, hat included. She was a purely impulse buy. In my defense she does have pink ears under the hat, not to mention the nose and the green eyes. File her under the category of “too cute to resist.” 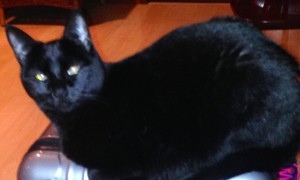 Our actual black cat is not amused.

In past years, Halloween decorations consisted of previously mentioned black cat in witch hat, a decorated pumpkin and a few tasteful imitation leaves. 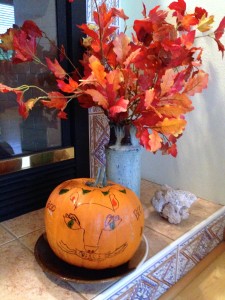 On November 1st, subtract cat and pumpkin before adding more tasteful imitation fall foliage and a couple kicking leaves while gathering a cornucopia of delights. You can see the faceless damsel on the far right. [Sidebar: I’ve never been big on cardboard turkeys.]

This system required getting out the boxes twice. So, this year I decided there was no reason not to let both holidays co-exist. After all, they share the same color scheme.

The thing is, once you let down the boundaries, anything can happen. 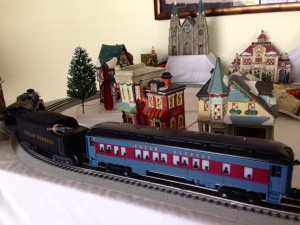 Da Handsome Bloke began getting into a festive spirit. First he launched the train set. Initially, the Polar Express circled its plywood, white-sheet covered track in complete seclusion. One couldn’t fault the engineer, if he imagined himself in the Swiss Alps. Then, while looking for something else, Da Handsome Bloke encountered the storage bin filled with our genuine nostalgic Christmas village. Ceramic buildings soon gave the train a destination.

Sensing weakness, the decorations laid plans to take over the house. Black cats, pilgrim damsels, a ghost village, and the engineers on the Polar Express train hatched a plan to unleash Christmas past with its artificial trees and grim faced nutcracker.

When I walked in the house last night, I saw it. The nutcracker gritted his teeth behind the cat, no doubt planning her removal. The miniature tree loomed over the cat’s hat. I’m sure it’s only a matter of days before lit reindeer appear on the back patio.