Baseball has teams of nine players. The playing field has a diamond shape. There are nine innings and numerous time outs, but no maximum time. Baseball players don’t wear spandex. In comparison to other athletes, they appear modest. The game itself is straightforward.

And yet, baseball is more than a game. It’s been called “America’s pastime.” A slow game symbolizing long summer days.

The Handsome Bloke monitors baseball teams, particularly the Seattle Mariners, closely. He often has colorful comments to make to the team manager and various players. When the Mariners win, he is up. When they lose – well, that’s just plain depressing. That’s how I knew I’d finally found the perfect Christmas present – one week watching the Mariners play Spring Training Games in Arizona.

We went last week. Here are some of the highlights.

There are fifteen teams in the Cactus League, founded in 1947 by the Cleveland Indians and New York Giants. Together they’ve created what’s said to be the greatest concentration of professional baseball facilities in the U.S. We followed the Mariners for five games.

Peoria Sports Complex is the oldest facility, built in 1994. The Mariners share the venue with the San Diego Padres, alternating their playing days. It’s a comfortable and appealing complex. Sitting behind third base, I was struck by how lush the grass looked – when everything outside was drab and dry. The Mariners won 5:3.

Seattle Mariners against the Cleveland Indians at the Goodyear Ball Park.

The Goodyear Ball Park has 8,000 stadium seats, 1500 lawn seats, 6 luxury suites, terrance seating on the third level behind home plate, and 500 seats in the Right Field Pavilion. They also have palm trees, which for some reason I found disconcerting.

The Cleveland Indians share facilities with the Cincinnati Reds. Both teams transferred to the Cactus League from their Florida training venues in 2009.

This time the Mariners prevailed 6:5

Seattle Mariners against the Los Angeles Dodgers at Glendale Camelback Ranch. This was a nostalgic game for me. My grandfather was a great Dodgers fan, and took me to a few games. I think that’s when I concluded that baseball was synonymous with a good time – and perhaps too much cotton candy.

The Dodgers share Camelback with the Chicago White Sox. The stadium has 10,500 seats with an additional 3,000 lawn seats. It’s also unique, because the diamond is opposite to the layout of the other diamonds. Some said this was why there was so much less shade than at the other venues.

In this game, the Mariners prevailed 4:1.

Mariners versus the Cleveland Indians back at the Peoria Sports Complex.  This time our seats were behind home plate, hence the netting.

Netting, of course, is no guarantee of safety. Foul balls go where they will. Hence the warning signs placed throughout all the stadiums. 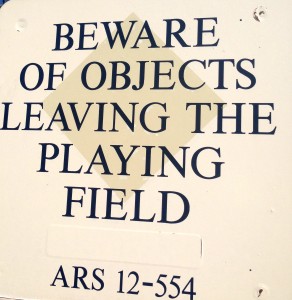 I couldn’t help but wonder why the sign advised us to beware of “objects” leaving the playing field. What, other than foul balls, should we watch for? Splintered bats, perhaps? Could be.