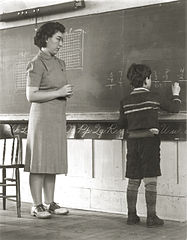 Hawaii Public Schools start today, so it seems appropriate to look at how school days have changed over the past one hundred years or so. For example, there is a popular list of Rules for Teachers dated 1915 that makes me wonder why anyone took up the profession. Note the assumption that teaching was a woman’s occupation. 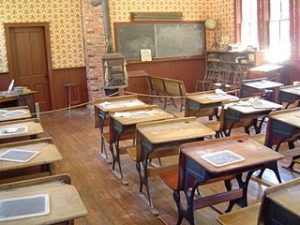 1. You will not marry during the term of your contract.

2. You are not to keep company with men.

3. You must be home between the hours of 8 PM and 6 AM unless attending a school function.

4. You may not loiter downtown in ice cream stores.

5. You may not travel beyond the city limits unless you have the permission of the chairman of the board.

6. You may not ride in a carriage or automobile with any man except your father or brother. 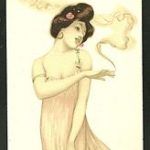 7. You may not smoke cigarettes.

8. You may not dress in bright colors.

9. You may under no circumstances dye your hair.

10. You must wear at least two petticoats.

11. Your dresses may not be any shorter than two inches above the ankles.

You may wonder if such rules really existed. I don’t know. But I knew a woman who taught in a country school before the second world war. She kept her engagement a secret because she would have lost her job.

Given cultural standards, I understand why teachers weren’t allowed to smoke, but I’ve no clue what was racy about the ice cream store.

The teacher photographed as she supervised a boy at the chalk board taught at the Landaff Blue School in New Hampshire in 1941. She boarded with the Chandler family for $7.50 per week, and received an annual salary of $800. By 1941 hemlines were shorter, and sensible shoes seem to be the norm. 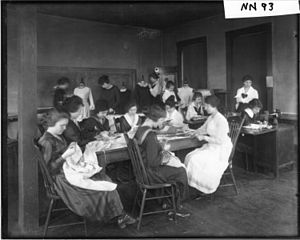 Girls were expected to conclude their education with marriage, and so trained in the new classes of home economics. I remember sewing class when I was in middle school. I never succeeded in making a proper bound button hole, nor in understanding why anyone would want one. 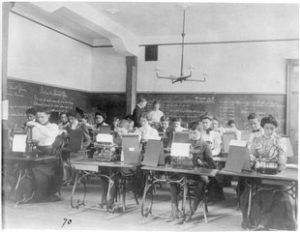 Typing classes gave girls a skill in case they had to be self-supporting. Now we call the skill keyboarding. 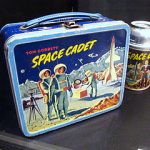 People who went to school in the 1950s and 60s probably remember several items that now show up in cultural museums, among them the tin (later plastic) lunchboxes, each with a thermos. These came out every year with new 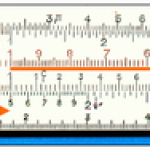 themes. Slide rules were also common in the pre-calculator age. And when calculators first came out, it was considered cheating to use one.

Today, students still need pens and paper, backpacks and lunch bags. Teachers no longer have to stoke the fire, though they still sometimes clean the floor. And everyone can go to the ice cream store.

3 thoughts on “Back to School”