So, I delved deeper. Ketchikan (population 8,250) kept it’s number one spot with slightly over 152 inches of rain per year. Hilo is second or third. If one considers Yakutat, Alaska (population 668) large enough to qualify as a city, it ranks second, and Hilo (population 43,263) third. If not, then Hilo is second, and Quillayute (population 104), on the Washington Olympic Peninsula is third. The only thing I know for sure is any city near a rain forest is extremely damp.

From Juneau, the m/s Amsterdam sailed north to Anchorage, Alaska’s largest city (population 300,000). Most cruise ships don’t stop in Anchorage, because it takes a long time to negotiate the inlet to the harbor. Usually, they stop at a small town called Whittier, 65 miles away, and those people who want to visit Anchorage take the bus.

I took an excursion from Anchorage to Prince William Sound in Whittier. Trust me to do things backwards. About 200,000 cruise passengers pass through Whittier each year – not bad for a town with a permanent population of 180. It’s a strange place. Whittier had enormous strategic importance during World War II, because of the Alaska Railroad. When the army left, it bequeathed its barracks to the town. The residents all live in a 14-story concrete building. Children don’t even leave it for school, using a tunnel to get to class.

Another anomaly is the Anton Anderson Memorial Tunnel through Maynard Mountain, built during World War II to transport men and equipment into the town. Today the  2.5 mile tunnel is a single lane highway. Traffic goes one direction on the hour and the other on the half hour. And sometimes the train goes through.

At Whittier I boarded the Klondike Express for the 26 Glacier Cruise. Not being a specialist, I think one glacier greatly resembles another, so I won’t count them out. I mainly enjoyed the wild life. My first sea otters, lounging on a chunk of ice. Did you know one inch of a sea otter’s pelt has as much fur as an entire German shepherd? Or that they are related to weasels – much bigger though.

Saw my first eagles and black legged kittiwake. And lots of glaciers – so many that early explorers had trouble coming up with names. But they had a cunning plan. They named one fjord College Fjord. The glaciers to the north were named after women’s colleges, those on the south after men’s schools. The glaciers on Harriman’s Fjord were named for prominent Americans. Which reminds me, Whittier was named for America poet John Greenleaf Whittier. This kind of situations reminds me why a liberal arts education is so important – science to recognize new discoveries and arts to name them. 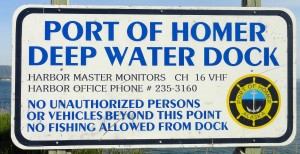 Homer, located at Kachemak Bay on the Kenai Peninsula, calls itself the “Halibut Fishing Capital of the World”. On a different note, the residents identify their home as a “Quaint little drinking village with a fishing problem.” Tom Bodett called it the “End of the Road.” Enticing, yes?

As I walked down the wharf to my excursion boat, the Rascal-U, I passed a boat that’s a star in it’s own right. The Time Bandit, a commercial crab fishing boat featured in Discovery Channel’s Deadliest Catch. Calling themselves the Bad Boys of the Bering Sea, captains Johnathan and Andy Hillstrand steer the 113-foot boat designed by their father. Interior comforts include a 4-man sauna.

Cruising to Gull Island on a postcard perfect day, I saw lots and lots and lots of sea otters. Some were mothers with almost brand new babies on their chests. Because of the density of their fur, otters spend much of the day grooming. If they don’t, the fur won’t keep out the water. Otters lack the extra layer of fat that other sea animals, like seals, have. So if their fur isn’t maintained properly the wet and cold get in. Not good when you spend most of the day lying on your back in the water. Mama otters get to groom themselves and their cubs. Looking at their bobbing faces, I could see what started the myth about mermaids.

Gull Island is a rookery where all kinds of sea birds build their nests – including puffins and kittiwakes. It’s a cacophony of raucous birdcalls – especially when an eagle comes near. 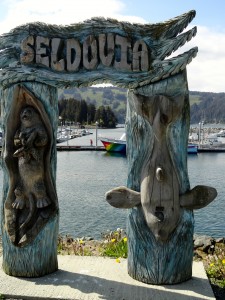 Seldovia (population 255) is a small town with a large marina.

There’s a main street fronting the shore and an historic board walk which meanders through a neighborhood back to the main shore road.

At the other side of town there’s a Russian Orthodox Church. Not much else to do, so I thought I’d check it out. Um, no sign. No roadway. Climb a hill to find a blue and white structure similar to the one in Juneau. Clapboards are a bit worse for wear, but perhaps they just hadn’t repainted it yet.

The doors were closed, and the windows clean. Someone thoughtfully put rocks and boards under the windows so visitors can peek in at the altar furnishings.

Is the church active or derelict? Hard to tell, but someone loves it enough to keep it maintained.