The Declaration of Independence wasn’t just an internal document for advocates of separation from Britain. It was a public statement meant to persuade American colonists not yet committed to the struggle, British Whigs, and European leaders. America couldn’t win without foreign support, particularly from France. It was important for the French to see that revolution in America didn’t set a precedent that would reduce royal power, but was the only course for English subjects whose king had failed to follow those precepts first set out in Magna Carta. [Previous posts on Magna Carta are here and here.]

Revolutionary Americans went to great lengths to prove King George III had violated the rights of his subjects and turned a deaf ear to their demands for redress. Under the circumstances, Americans invoked the right of revolution and concluded that George III’s actions absolved them from all allegiance to England.

It was important to tell the world that these were not the actions of volatile riff raff, but of honorable men. More than life or wealth, the most important attribute of an eighteenth century gentleman was his Honor. The word conveyed everything about a man and his value to society. Honor could only occur among equals, a status held by independent men who didn’t depend on anyone else for their livelihood. An honorable man kept his word to other honorable men.

With this in mind, the signatories closed their Declaration in a way to prove their worthiness.

And for the support of this Declaration,

with a firm reliance on the protection of Divine Providence,

we mutually pledge to each other

our Lives, our Fortunes, and our sacred Honor.

Well aware that with their signatures they identified themselves as traitors against Great Britain, fifty-six men signed the Declaration of Independence. John Hancock, president of the Congress, signed boldly in the center, saying “There! His majesty can now read my name without glasses.”

Abraham Clark’s signature is on the bottom of the fifth column, legible but less than flamboyant.

Did the signatories have to make good on their mutual pledge?

Many lost their fortunes, among them:

But what about their Honor?

Did they retain their reputations and mutual respect? 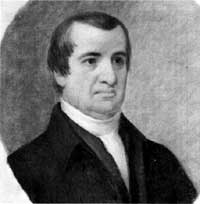 Consider the story of Abraham Clark, an ordinary farmer and lawyer from Elizabethtown, New Jersey. A married man with ten children. A professional man known as the “Poor Man’s Counselor” for his willingness to assist poor farmers with titles to their land. A politician who served at the local level before being appointed to New Jersey’s delegation to the Continental Congress.

Writing from Philadelphia, Clark informed his constituents: “Our Congress has resolved to declare the United Colonies Free and Independent States.” Aware of what he was risking and the seriousness of the delegates’ mutual pledge, Clark noted “We can die but once.”

There are events worse than death. Two of Clark’s sons, Aaron and Thomas, were officers with the Continental Army. They became prisoners of war. As officers they might have been eligible for parole, but when the British discovered who they were, both men were placed on the prison ship Jersey where they received brutal treatment.

The British informed Abraham Clark of his sons’ condition, and said the men wouldn’t be fed until Clark renounced his signature on the traitorous Declaration of Independence.

Clark responded he would give the British everything he had, but as a man of honor, he couldn’t renounce his signature.

Clark offered to exchange his life for that of his sons.

Clark held fast to his signature and his conviction that if he denounced his honor to save the lives of his sons, he would be leaving them a legacy of dishonor far more painful than death.

This is a difficult concept for modern Americans to understand. Most parents will do anything to save the lives of their children and are expected to do so. But in the eighteenth century, honor was more important than life because without honor, life had no value.

When American patriots signed the Declaration of Independence they pledged everything that made their lives worthwhile, not just life itself but the means by which they held their place in society. When a gentleman gave his word, there was no going back.

Epilogue: As things turned out, both Clark’s sons were released in a prisoner exchange. Clark continued to serve the new United States as a delegate to the Constitutional Convention and a member of the House of Representatives. He died in 1794 from what was diagnosed as sunstroke.

Firme and decided as a patriot

Zealous and faithful as a servant of the public

He loved his country and adhered to her

In the darkest hours of her struggles

Featured Image: Signing of the Declaration of Independence by John Trumbell. US Public Domain. Wikimedia Commons.

Gordon S. Wood. The Radicalism of the American Revolution. NY: Alfred A. Knopf. 1992.