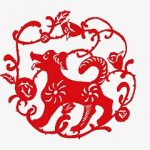 Friday marks the lunar new year, generally known as Chinese New Year. Since the festival follows the moon, it can occur any time between January 21 and February 20.

This year the Chinese Zodiac Calendar turns to the Year of the Dog and is the first to celebrate the Earth Dog since 1948. People born in this year are considered communicative, serious, and responsible. Loyal to friends, family, and those who support them. They can also be critical, stubborn, quick to anger and sensitive to criticism. As it happens, Donald Trump was born in the Year of the Fire Dog.

But it won’t be a good year for him. The year of your zodiac animal is when a person is vulnerable to demons. This can be warded off by wearing red underwear. No, I don’t know what color is worn by Mr. Trump.

There was once an evil spirit called Sui who appeared on New Year’s Day and patted the heads of sleeping children. The children came down with a fever. One family was playing with coins before the child fell asleep. The parents left the coins on the pillow. When Sui arrived, the coins flashed and frightened him away. Ever since, parents and grandparents gift children with lucky money in red envelopes. Some teens now have “red envelope apps” so relatives can transfer their gifts digitally.

The tangerines represent wealth, because the Chinese words for tangerine and gold are similar. The fruit is a traditional new year decoration.

RED is an important color for New Year decorations as well as money envelopes, because once there was a monster named Nian who lived at the bottom of the sea. Once a year he came on land to eat animals and humans. Villagers generally fled to the mountains.

One year a beggar arrived in the village seeking shelter just as everyone was leaving. He persuaded an old woman to take him in by promising he could chase Nian away. The beggar decorated all the homes with red paper. At midnight Nian arrived at the village, but stopped when he saw the red paper. Nian roared in anger. The beggar lit firecrackers. Nian ran away. 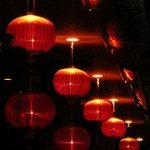 Chinese new year celebrations occur over fifteen days, ending with the Lantern Festival on the first full moon of the new lunar year. The custom began when a swan left heaven to visit the human world. A hunter inadvertently killed it.

The heavenly Jade Emperor was furious. He planned to take his revenge by burning the earth. Other gods warned humanity. So on the night the Jade Emperor prepared his attack, people lit firecrackers and each household hung out lanterns. Looking down from heaven, the Jade Emperor thought the earth was burning, and humanity survived.

With 20 percent of the world celebrating Chinese New Year, there is a variation of greetings.